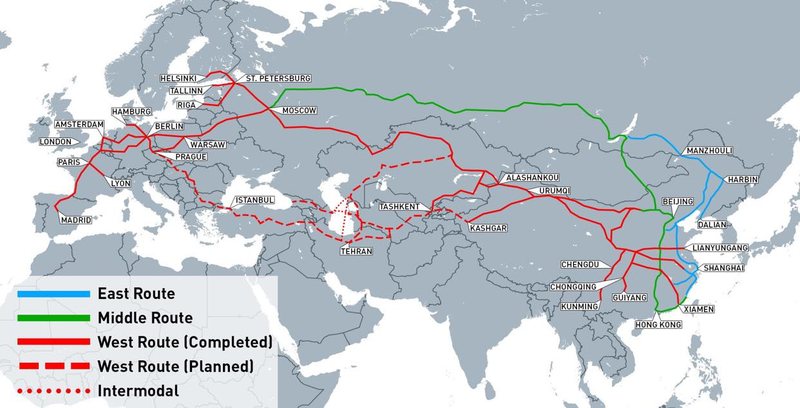 Eurasia, the largest land mass on the planet, the cradle of many civilizations and the battlefields of peoples and ideas. The division between Europe and Asia as two continents is a historical social construct, as they have no clear physical division between them. However, for Eurasia to function as a meaningful idea, a certain level of geopolitical cohesion is required. Significant regional cooperation requires a relative opening of Eurasia's own internal borders, and most importantly, requires an opening of the mindset of the respective countries for cooperation!

The term Eurasia became known a century ago in Russia, and was soon labeled especially by Europeans as a Bolshevik idea, and simply shunned by the academic and literary world for many decades. The importance of Eurasia as an object of study in geopolitics, economics or sociology has been widely discussed in the academic literature recently as ‘a great idea’. Going from idea to action means that those great contradictions can be overcome somehow, and that the region, however undefined, makes sense politically, as it is full of a common economic, cultural and social heritage.

From theory to practice

The most significant effort to ensure some kind of cohesion in Eurasia is China's “Belt and Road Initiative". This initiative was conceived in terms of infrastructure connectivity and integration, and is clearly portrayed as posing no threat to the national sovereignty of any of the member states. On the other hand, the obstacles that characterize the integration efforts of the countries themselves are loaded with political connotations.

A joint action plan was unveiled in March 2015 by the National Development and Reform Commission of China (NDRC), the Ministry of Foreign Affairs and the Ministry of Commerce of China, which provided the development map of this "New Silk Road", revolves around the five main ideas of connectivity, policy coordination, investment facilitation, financial integration and people-to-people exchanges.

In the context of the globalization and the times in which we live, the ties and interdependence between countries have become more pronounced, and no country can be isolated from the international community. Global issues such as responding to financial crises, regulating the international trade system, climate change, environmental protection, public health security, energy and resource security, food security, etc., have transcended the power of the nation-state and geographical boundaries. Therefore, strengthening cooperation in global governance has become the consensus of all countries in the world.

Li Gang, a governance researcher, says both the European Union and China are active advocates of global governance reform and have many common positions on many issues. The EU plays a vital role in formulating rules in the areas of climate change, international dispute resolution mechanisms, environmental protection, product standards, etc. China and the EU can and should join forces to promote multilateral cooperation and promote political solutions to international and regional issues.

The year 2021 has been packed with events and exchanges between China and the EU, but on the other side of the Atlantic there have been comments, suggestions, and sometimes conditionality towards this relationship. With Biden's new administration, the focus shifted to traditional allies, i.e. West Europe. The discourse of the previous Trump administration was never well received by European governments, and for 4 years in a row, this was evident. The US rapprochement with Europe has become significantly more intense following the China-US high-level dialogue held in Alaska on March 18-19 this year. Days after that meeting, on March 23, Secretary of State Anthony Blinken visited NATO headquarters and, speaking with Secretary-General Stoltenberg, said that the United States' determination to strengthen and revive ties with NATO Allies is at the top of the American agenda.

On March 26, US President Joe Biden said he suggested to British Prime Minister Boris Johnson in a phone call "[...] Democracies need to have an infrastructure plan to rival China's Belt and Road initiative." Biden's remarks came after he stated a few days ago that he would prevent China from overtaking the US in become the most powerful country in the world, pledging to invest heavily to ensure America dominates the growing rivalry between the two largest economies in the world. It is clear that Washington gave two clear signals to Europe, and apparently, Europe took note.

The case of the Suez Canal and lessons for Eurasia

On March 23, 2021, the 400-meter-long Ever Given ship (Japanese-owned and managed by Taiwan-based company Evergreen) was stranded in the Suez Canal, hit by a sandstorm and so blocking the passage to other ships for days. In that channel passes 12% of world trade volume and 50% of maritime trade volume.

Marine and logistics experts warned that the incident would result in delays in the delivery of daily items to consumers around the world. The value of the delayed goods is estimated at $ 400 million every hour. Aided by the moon and tides, the giant container ship stranded in the Suez Canal was on its route six days after blocking the most vital maritime trade route of the seas.

However, even a short-term blockage on the Suez Canal will have a domino effect for several months along the global supply chain. Some freight forwarders immediately noted that the demand for alternative means of transport is expected to increase especially on Europe routes to Asia and vice versa.

China has been planning for alternative routes since 2013, and the “Belt and Road Initiative” envisions this and much more. In an increasingly interconnected and interdependent world, increasing infrastructure options brings only mutual and extended benefits to all countries involved. Disruption of global supply chains because of the blockade of the Suez Canal has serious consequences for Europe and Asia, it is enough to think that the price of fuel increased the same day and there will be delays in deliveries of medicines, which in time pandemic become fatal.

At the time of the reopening of the canal there were 450 ships waiting to cross (minimum 450 thousand containers of goods) and the consequences will come in waves according to the ports of final destinations. This logistical catastrophe should serve as a warning for the future and for reflection.

Finally, Amel Kovacevic, a former ambassador of Bosnia and Herzegovina to China, in December 2017, at a conference held in Beijing would state: We must definitely work together to promote “Belt and Road Initiative” as it represents the ancient Silk Road, which connected East and West, Europe and Asia. And, we have it in our blood to cooperate because our own DNA is the DNA of the Silk Road, through which nations came together at the cellular level... and Eurasia can become an important geographical hearth for building a community with a shared future for mankind.

Rama, the inventor and executor of the capture of the state in Albania

Why not have a transitional PD-PS co-government in Albania?

Can the history of Albania be written by indoctrinated academics?

Albanian philosophical folklore obeys the rulers and "runs away" from democracy!

Three counties like a talisman, re-election in all of Albania!