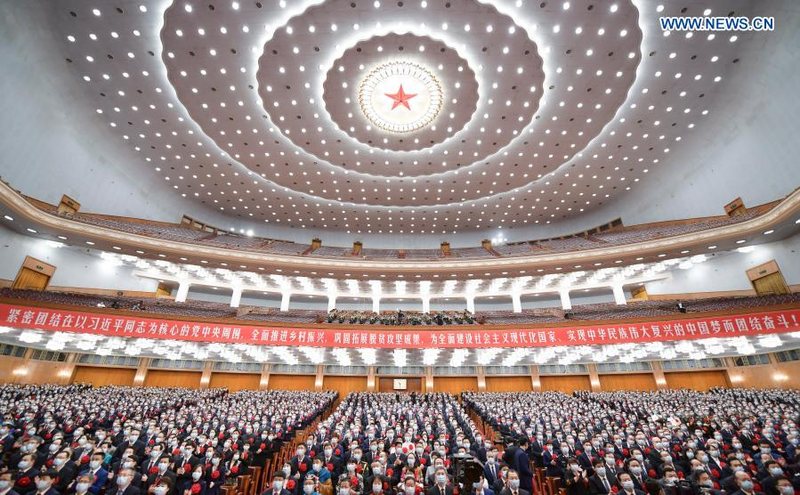 The Great Hall of People, February 25, 2021: An elderly, tearful man is being focused on television cameras while the voice of Chinese President Xi Jinping is heard in the background. President Xi mentions the name of his daughter, Huang Wenxiu. The young woman being mentioned lost her life in a landslide on her way to control the villages that were part of the local poverty alleviation program. Wenxiu alone helped 103 rural families shake off poverty from their homes and lives. Her death attracted great attention among locals and on social media, who mourned and honored her. She dedicated her life to the well-being of others, and in 2021, in the Great Hall of the People there this political history of modern China has begun, she was honored with national titles.

The face of a young girl, whose life was still broken before it started well, shows the human price of a great national mission such as eradicating poverty.

At the ceremony, President Xi said China had scored a "complete victory" in its fight against poverty. Xi made the announcement as he addressed a grand meeting held in Beijing to mark the country's achievements in alleviating poverty and to honor the human role models who have been at the forefront of this great action. Over the past eight years, 98.99 million rural residents have all been lifted out of poverty. 832 counties and 128,000 poor villages have been removed from the extreme poverty list. China has thus contributed more than 70% to global poverty reduction over the same period.

A given word and a promise kept

In November 2013, during an inspection tour in Hunan, President Xi introduced the concept of "targeted poverty alleviation." This concept of adapting aid policies to different local conditions became a guiding principle in China's fight against poverty. To address these issues while carrying out targeted poverty alleviation, around 800,000 officials were deployed to first-line poverty alleviation missions, working at local levels. Doctors, teachers, the military, researchers, nurses, traders, engineers, and even production line owners were deployed to provinces in need to ensure locals the same rapid growth as the rest of China has experienced.

But the work does not end there, directly after the Chinese New Year holidays, the "Central Document No. 1" for 2021 was unveiled, highlighting efforts to comprehensively accelerate rural vitalization and modernization of agriculture. As the first policy statement issued by China's central authorities each year, the document is seen as an indicator of priorities. Resolving issues related to agriculture, rural areas and farmers remain the top priority, the document notes, calling for innovation-driven development to support the country's new journey to build a fully modern socialist country. Unlike previous ones, this year's document reveals the Central Government's ambitions for a new era and the goals to be achieved not only in 2021, but also in the time frame of the 14th Five-Year Plan (2021-2025). The document continues to trace measures aimed at consolidating and expanding the achieved results of poverty alleviation, so that areas that have just been lifted out of poverty are not turned back into it and their developments are effectively linked to the overall objectives of the country for the revitalization of rural areas.

Egalitarianism is a trend of thought in political philosophy. An alternative view extends to this option by expressing that: People should be treated as equals, should treat each other as equals, and should be related as equals, or enjoy some kind of social status equality.

"For each according to his contribution" is a principle of distribution that is considered to be one of the defining features of socialism. Refers to an agreement through which individual compensation represents one's contribution to the social product (the total output of the economy) in terms of effort, labor, and productivity. This is in contrast to the method of distribution and compensation in capitalism, in which property owners can receive income due to ownership, regardless of their contribution to the social product.

But how can a transition be made from "For each according to his contribution" to "For each according to his needs" which applies to socialism. In theory, such an arrangement would be made possible by the abundance of goods and services that a developed socialist system would be able to produce; the idea is that, with the full development of socialism and limited productive forces, there will be enough to satisfy the needs of everyone.

In this context, the Chinese government has adopted targets that are extremely egalitarian, compared to other developing countries. Moreover, the high degree of central planning gives the state great powers and opportunities to pursue these objectives, because the state has redistributive instruments that cannot be found in a mixed economies.

In the march towards common prosperity, no one will be left behind!

This was the commitment that President Xi Jinping delivered 8 years ago. In this great development of the last four decades not everyone in China benefited equally. This is more than normal as the opening of Special Economic Zones (SEZ) was more closely linked to the major coastal cities of East China, and within it there was still inequality and poverty, especially in rural areas. These two elements were addressed in Beijing 8 years ago and were applied in the regions according to the directives of the Central Government and we reach 2021, where the leader of China could officially declare complete victory to these major challenges.