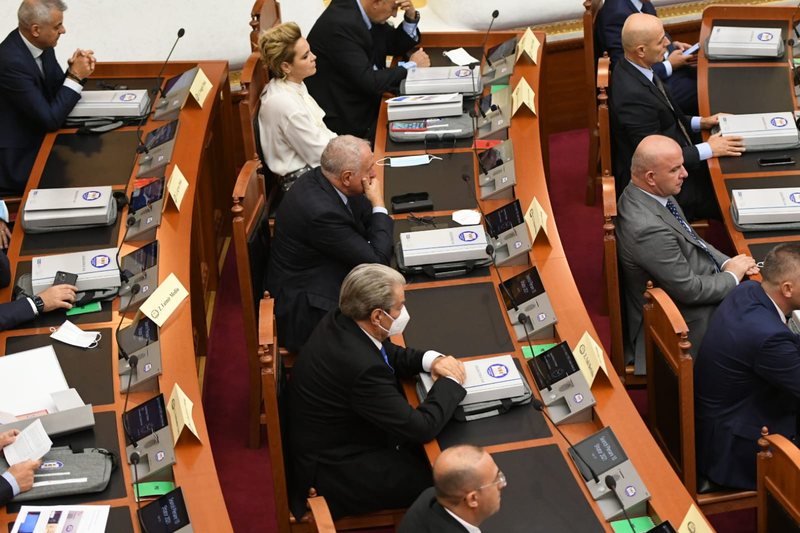 It is very good that the DP has undertaken to propose constitutional changes. Absolutely a job that was sabotaged when he left the Albanian Parliament and that on this occasion were also sabotaged those advantages that an opposition has for the control of democracy and laws in the Albanian Parliament. The interests of the Albanians were also betrayed. But that time has already passed and the proposals for "Vetting of politicians from SPAK, change of territorial map and return of coalitions" are things that of course the opposition, any kind of opposition, can do together with the position! The PD amendments for constitutional changes have been whitewashed and there is nothing wrong with that, on the contrary it is a "great joy for all of us" that once when we said do not leave, but stay there and work for democracy:

Here is what they propose in a law that intrigues us so much: In law no. 8417, dated 21.10.1998 "Constitution of the Republic of Albania", as amended, the following changes are made: Article 1 - The first sentence, of point 3 of article 45 , is amended as follows: 3. Citizens who have been sentenced to imprisonment, with a final decision, for committing a crime, or citizens who have inappropriate contacts with persons involved are excluded from the right to be elected. in organized crime, or legally unjustified assets, according to the rules established by law approved by three-fifths of all members of the Assembly. Very beautiful, yes very beautiful! But by the way and why I am not at all an "inventor of laws as it is a part of the DP especially with the law of decriminalization" and who can "imitate" but not propose I say that: perhaps they forgot to add something very essential to them and Albanian politics. It seems like something "legal absurdity" and that other countries hardly have, but perhaps I say to us, it is not so absurd when we need so much decision-making of our strategic international friends, that we do something right against crime, not to bring his people to Parliament. So they have not forgotten anything in the DP to propose that "the candidacy of individuals who have the announcement of expulsion and that non grata in the US and EU is prohibited"! So I mean, have they accidentally forgotten to add it to their proposal and "not allow the candidacy of individuals who have been declared non grata in the US and the EU" or have been forced to leave not to enter those countries! Whether for a visa violation or rule there! You will say: why will we lower the bar of "good biography" so much here in Albania !? But I answer I'm ready! We do not lower the stack like that, but we raise it because we are not able to remove the criminals themselves to enter the Assembly freely! Because the parties themselves have used the gangster way to make their own law in politics. We agree to consider "as good men" all traffickers and people with the habit of robbery and theft who have become rich and abusing abroad as such. And this is certainly a proof that has time as an action in politics. There was also justice that did not convict any of them in Albania and thus the number of criminals entering was greater than anywhere in the Balkans and Europe. Then why in the amendment that determines who should, or rather who should not enter the Assembly, should not that part of security be increased by Americans and Europeans as an act of their legal recognition of incriminated individuals who have acted or are acting in their respective countries? Why so? I say that the justice of the individual's freedom is not distorted more than it should be than we have distorted it, by introducing in the political representations and those of the people, criminal individuals of the whole spectrum of crime in Albania and among Albanians. Once upon a time, the Assembly yesterday (and still does today) seemed to be a representative of "organized crime" or of the corrupt in power, and only at the insistence of the Americans did anyone leave this representation as an individual. Therefore I say, did they "accidentally" forget in PD? And maybe they are not to blame when a person as important as the speaker has non grata who also has the focus of the PD hahahaha union as a "democratic and even pro-American" force! Or are they afraid! Who knows, and the latter may be an option. But they do not have to be afraid of something that for our parties as education and degraded political morality for years is an objective necessity.