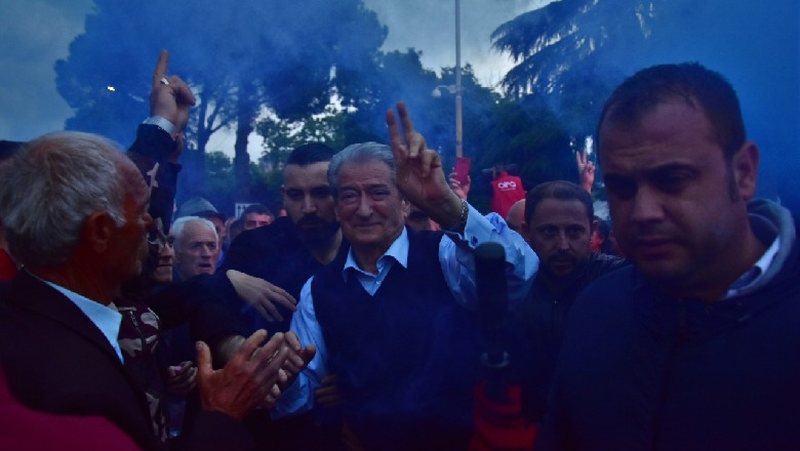 Former Prime Minister Sali Berisha seems to have "thrown fuel on the fire" a day before the protest called by him against the government. This Thursday's protest, called by "Foltorja" and the Movement for Integration", will start from the blue headquarters, while it will march towards the Prime Minister's Office, where speeches will be held, which will conclude with the speech of Sali Berisha. But yesterday, in an appearance for the media, the former prime minister accused Prime Minister Edi Rama of abusing citizens' money, and for this reason he should consider resigning. Berisha even warned the blue uniforms not to provoke the protesters tomorrow, implying that he is not responsible if the situation degenerates into violence. "I warn all types of police, that any pressure, any attitude, any attempt to intimidate, to violate, to hinder, the opposition people, will be registered and will receive deserved personal legal punishment. I warn not to provoke the protesters. It is true that the heat and temperatures are high, but higher are the internal temperatures of the people who come to protest against this regime. So tomorrow is a big day. Tomorrow is a day of inspiration, a day of real struggle. The opposition comes down to the square. Edi Rama is invited to consider his resignation as soon as possible", he declared.

But MP Edmond Spaho also warns of massive participation in today's protest. During a statement to the media yesterday, Spaho listed some of the reasons why people will fill the square tomorrow, to protest against the government of Edi Rama. Meanwhile, the MP read the review of fuel prices by the Transparency Board as a move that shows Rama's fear. Also, Spaho made a call for massive participation in tomorrow's protest against the government. "Nothing can save Edi Rama and his gang. Tomorrow, the citizens' revolt against bad governance, thieves, corrupt people, anti-nationals, which we have been carrying on our backs for 9 years, will begin and will end when the mafia leaves power. Everyone go out to protest to save yourselves and save Albania", underlined Spaho.

The General Secretary of the LSI, Endrit Braimllari, participated yesterday in the third round table organized by the Civil Society with the presence of the President of the Democratic Party Sali Berisha, in the public meeting of the Front for the Salvation of Albania, in the framework of the protest of the 7 July. In his speech, Braimllari listed a number of reasons why we should protest the next day, since the country requires the union of all political and non-political energies against such a regime that does not think about the citizens. Braimllari has also requested a mass participation as a civic response and as a moral obligation.