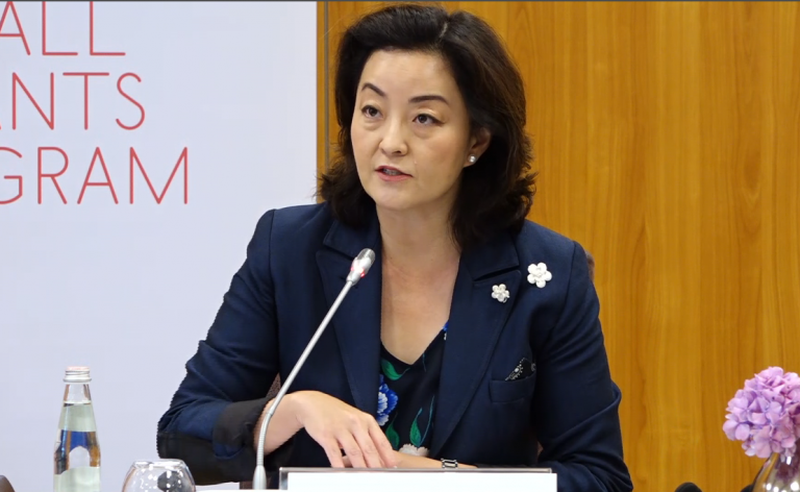 The US Ambassador in Tirana, Yuri Kim, amidst strong messages, gave today some sharp ultimatums for the advancement of the Justice Reform.

At an event for this reform, which was also attended by the heads of the HJC and the HJC, the US chief diplomat said that they have an essential role in advancing the reform, adding that if they do not dare to do so, the costs will be paid. future generations.

Among other things, Ambassador Kim addressed a strong message to politicians and the entire judicial system, saying "Let us stop pretending and move the reform forward."

"We have to find a way to move forward. We will get acquainted with the details of the findings of the Albanian Helsinki Committee. Institutions of justice reform have already been set up. It is important for us to understand the work of the HJC and the HJC, how they have progressed so far. SPAK has prosecutors. The first class of BKH investigators will complete the training soon. There are a lot of judges and prosecutors who have been fired and that is a good thing. If we are serious about capturing the moment in which Albania is, in order to have a better and more worthy Albania as an EU member, more secure and as prosperous as any other EU member, justice reform must continue.

Let’s stop pretending and move the reform forward. I understand that the work of judges is not easy, but it is important. We can not afford not to succeed in this reform. First, the HCJ must fulfill its task of having an SPAK with judges who have passed Vetting. There is no doubt that filling the vacancies caused by Vetting has been alarming. But the HCJ has the opportunity to get the process back on track. The council must now act to make an assessment of the system, do the judicial mapping and hold the magistrates accountable.

The council should establish and set standards well, in order to hold magistrates accountable. The council must follow the rules and procedures, at the time determined by law. The HJC and the HJC have a lot of work ahead, but they are not alone. We understand that they are human beings. We understand the pressure, perhaps not as well as you, but we understand as much as you do the importance of moving forward. This is the moment, you have an extremely important role. Children, the next generation, have their minds on you. Nobody thinks that it is an easy thing, they know that there is a personal and professional cost, but it is a cost that is worth it, because it is in the best interest of the Albanian state. "If you are not brave, pay the costs, or if we all do not pay the costs, future generations will pay," said Ambassador Yuri Kim.

"Crime is in the hands of tenders in Fier" / Armando Subashi reacts for the first time after Petro Koçi's 'BOMB': The media have abused! It is not the end of the world if ...

Strong message comes from PD: The situation is alarming! Let's go out in protest

Fatbardh Kadilli: Why Sali Berisha can not be compared to Tom Doshi

Agreements between Kosovo and Albania, Milaim Zeka reveals the behind the scenes and bursts the strong statement: Only words and signatures!

Fatbardh Kadilli reveals two well-known politicians who should not be part of the green opposition: It should be projected beyond these two men

Artan Fuga strong message to Rama: Like a drunk who ran away ...

"Part of the Urban Renaissance project", Rama gives the good news for the citizens of Lezha (PHOTO)

What is the opposition's plan for September? DP MP comments on OSCE / ODIHR report and warns of new developments