Bujar Leskaj promotes in Vlora the book about Joe Biden: Success is achieved when the goals and objectives are clear 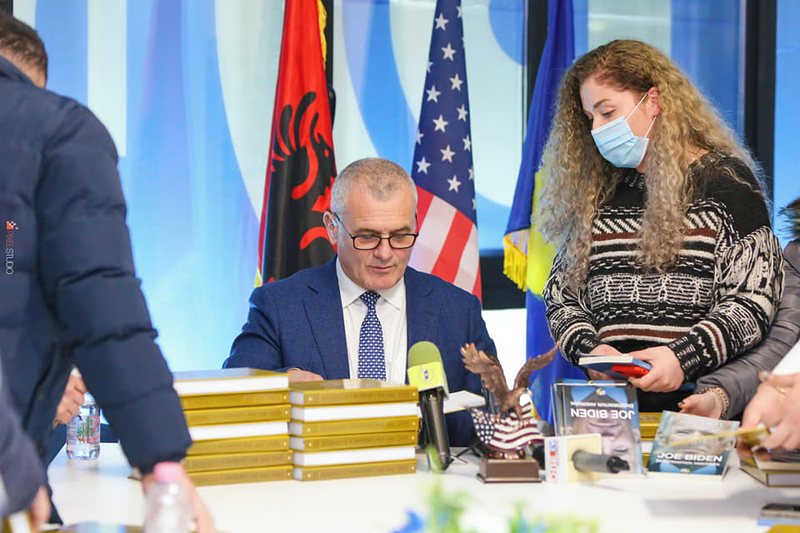 As Joe Biden officially took office as President of the United States, the political leader of the Democratic Party in the Vlora region, Bujar Leskaj, attended the inauguration ceremony in the company of young Democrats. Through a post on the social network Facebook, Leskaj has published several moments during the promotion of the book "Joe Biden, the American dreamer", and at the same time his book "GAO, NIK and Dodaro lectures". Leskaj points out that the purpose of the meeting and the promotion of the book "Joe Biden, the American Dreamer" is to promote the spirit of democracy in policy-making. According to him, young people not previously engaged in political forums should understand that the best way to politics is that of Biden, so the promotion of such a book is necessary in these times when our country is on the verge of elections. Laskaj said that this book shows the intentions of the DP. Promotion of Evan Osnos's book with young people: "Joe Biden, the American dreamer". Today, at the same time when the new US President was inaugurated in Capitol Hill, I met with young members of FRPD Vlora, FRPD Selenica and other young people not engaged with the PD forums present today at the headquarters of the electoral headquarters of the Democratic Party. Together with the youth we attended the inauguration ceremony of President Biden. "The symbolism of the meeting with the youth was selected to show the way of policy making and the way to achieve success when the goals and objectives are clear", writes Leskaj. While emphasizing that every young person should read both books and rely on the messages he gives, Leskaj said that yesterday he himself gave to the young people present at the meeting a copy of the book "Joe Biden, the American dreamer". During the meeting we promoted the latest publication: "Joe Biden, the American Dreamer" and discussed the book. Finally, I presented the young people with the book by the American author Evan Osnos about the life of the new president (published in Albanian by the Morava Publishing House), as well as my book "GAO, NIK and Dodaro's lectures" which talks about the highest Institution of Audit in America and its director Gene Dodaro ", he writes.

The book "Joe Biden, the American dreamer" begins with Biden's life, since he was a child and through these lines the author shows that the president has had the spirit of democracy and equality since childhood. According to the author, Biden has been part of ongoing anti-racism protests in the US, which has played an important role in them. "Biden was an average but popular student at the Archer Academy, a private school in Delwuer; to cover the pay, he worked with the maintenance of the sports fields. He played a small role in protests against racial segregation, including a rally in front of a restaurant in Wilmington, where they refused to serve a colored classmate in 1961. In his first year of school, he visited the Bahamas during the holidays. of spring ”, is written in an excerpt of the book. Another part of the book shows that the pandemic revealed the truth about who Biden supported and who Trump. According to the author, Biden did not think about the elections through campaigns with promises, empty but came to the aid of families and the needy. That's why Biden was elected by the people even though Trump made more media ads during the campaign. "As the election approached, Biden faced a difficulty: his political success had never come from inspirational speeches or the clever use of social media; had come to him from direct contact with people, but the pandemic had made this approach to people almost impossible. "The presidency is not just an administrative task. "It is, first of all, the place of moral leadership," the author explains. According to the author of the book, Biden called his presidential campaign "

"Every teacher is a hero who takes you by the hand and enlightens you", Evis Kushi comes out with the powerful message for March 7

Another sudden move! Member of Parliament decides not to run in the April 25 elections: I do not want to be part of the degradation of ...