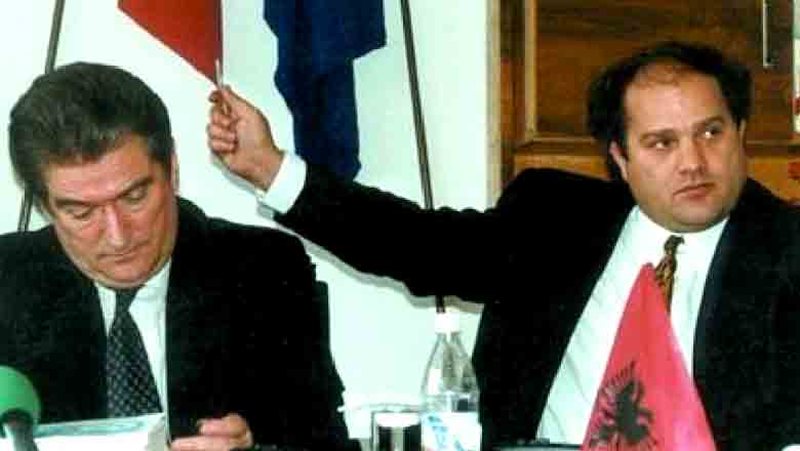 The Tirana court sentenced Izet Haxhina to 21 years in prison a few months ago, finding him guilty of involvement in the murder of former MP Azem Hajdari in 1998. His arrival in Tirana was seen as a signal to reopen the murder file of Hajdar, since those who ordered the murder are free. Haxhia pointed the finger at former Prime Minister Sali Berisha, but the latter managed to stay away from the process. The prosecution and Haxhi's lawyer requested that he be called to testify in court, but the court rejected the request for Berisha. The sensational file of the investigation into the murder of Azem Hajdari carries many secrets for the persons involved. "SOT" newspaper has and is bringing to the reader an interview of the former prosecutor from Gramshi, Violent Çoniku, who investigated the case of the killers of the democratic deputy Azem Hadari.

- When did you have the first contact with the "Hajdari" file?

In October 2002, I was tasked by the order of the General Prosecutor Theodhori Sollaku, to appear and testify in the Parliamentary Investigative Commission called "Klosi", which was dealing with the case of the murder of Azem Hajdar. I appeared before this parliamentary committee and answered every question, directed by former members of this committee, such as Bashkim Fino, Mustafa Muçi, Gazmir Bizhga, Spartak Ngjela, Fatos Beja, Edi Paloka, etc., who requested information from my side, which were related to a case that I had investigated as a prosecutor in Gramsh, regarding the two arrestees Isamedin Haxhia and Halil Haklaj, who were arrested on July 17, 1998, "for arms trafficking". These names later turned out to be related to the murder of Azem Hajdari. This is why I was called to the parliamentary committee. I have answered all the questions, in accordance with the investigative file I had prepared for them, regarding their arrest, for arms trafficking.

-What were the directions of the questions that the deputies of the investigative commission asked you?

- Have you had contact with Mr. Thimjo Kondi that day?

I have had no contact, not even a greeting with him. He went to the Gramsh district court, which was one floor below the prosecutor's office. I don't know what he talked about, but I know the fact that the trial of Haxhija and Haklaj was set by the judge of the case, Brundilda Çarçiu, on October 20, 1998. After the arrival and departure of Thimjo Kondi in the Gramsh court, the trial date for they were approached and scheduled for September 4, 1998, a session in which, like Isamedin Haxhiaj and Halil Haklaj, they were suddenly and unexpectedly released.

-According to you, what was the motive for their release?

No explanation was given at the hearing, but their release was motivated by the fact that weapons were in free circulation for all Albanians after the opening of the warehouses in 1997, and thus, according to the court's decision, they were sentenced only to prison time . There was even a reminder that "this issue should be closed and no one should deal with this issue again".

As a prosecutor, did you interfere in their release?

The Parliamentary Investigative Committee also asked me this question and I testified that I had an intervention, but not from SHISH, but from Izet Haxhia, the brother of Isamedin Haxhia, the former bodyguard of Sali Berisha, who is known to have been speaking in name of the "doctor" (Saliut), but that I did not influence their release at all, even he, after ignoring me, did not insist further after my refusal. They were released, as I said above, after the arrival in court of the former Minister of Justice, Thimjo Kondi. I know that they were released, but who had convinced or ordered Thimjo Kondi to release them, only he knows, perhaps from powerful people in power, parliament and special state services. I only did their investigation, while the arrest was made by the prosecutor of the Gramsh district.

- Did the Parliamentary Investigative Committee have their file?

That file was prepared by me and then, I was told, that it no longer exists, according to the information, this file was taken by SHISH. I don't know where this file is either.

- What does their release have to do with the murder of Azem Hajdari?

I believe that their release is related to the murder of Azem Hajdari, because those who released them, i.e. not the executor of the order for their release, former minister Thimjo Kondi, but others more powerful than him, have been accused by Sali Berisha. like the real killers of Azem Hajdar, who will one day come and will definitely be published. They were released on September 4, 1998 and released by order from "above". According to the SHISH document, which was presented to me in the Parliamentary Investigative Committee, it was said that "he was arrested by an order of Azem Hajdar, which, according to that document, was given to me by Azem". This document was made known to the two arrested persons, Haxhiaj and Haklaj, who had it, even as they declared to me during the investigations, they were encouraged to create a conflict with Azem Hajdari and to take revenge on him. After their release,

- Who knows, apart from the Parliamentary Investigative Committee, about the information you have about the murder of Azem Hajdari?

Regarding the testimony I gave to the Parliamentary investigative committee, I informed Mr. Sali Berisha, who has my testimony a long time ago, that I should come to the committee, or more precisely, since August 1999. He has all the papers and my testimony. Sali Berisha knows all the facts and it is his right, if he will make them public and if he will request, or not, the reopening of the case of the murder of Azem Hajdari. I confirm to you that before I went to the commission, i.e. 1 week ago, I went to Sali Berisha again, called by him, when I was a prosecutor in Pukë, informing me through the secretary of PD Pukë, who came to me of the night at home and told me that "Edi Paloka had informed him that I should urgently see the "doctor" in Tirana". When I went to Berisha, he told me: These days you will be in the Parliamentary Investigative Committee. Say what you told me and declare the truth, that Fatos Klosi and Thimjo Kondi were in Gramsh and then Isamedin Haxhiaj and Halil Haklaj were released. Berisha later told me: When we come to power, we will open the file, but what you discussed with me, do not discuss with anyone and do not give anyone any letter".

The Dossier Authority reacts to the blackmail and threats of the head of PL, they demand that Ilir Metaj be prosecuted, they call on the justice bodies to work on his lawsuit

The dismissal of Gladis Nano, Berisha shows the strong behind-the-scenes: He denounced the criminal connections of ministers, governors and the prime minister's family

Discord between them? Yuri Kim met Ilir Meta yesterday, this is how Sali Berisha reacts

"They will start very soon"/ Berisha warns: The opening of the party is happening. Here is our step to remove Edi Rama