The files of the former State Security/ Berisha shows the move made by Edi Rama: It is hopeless, as far as the non grata are concerned... 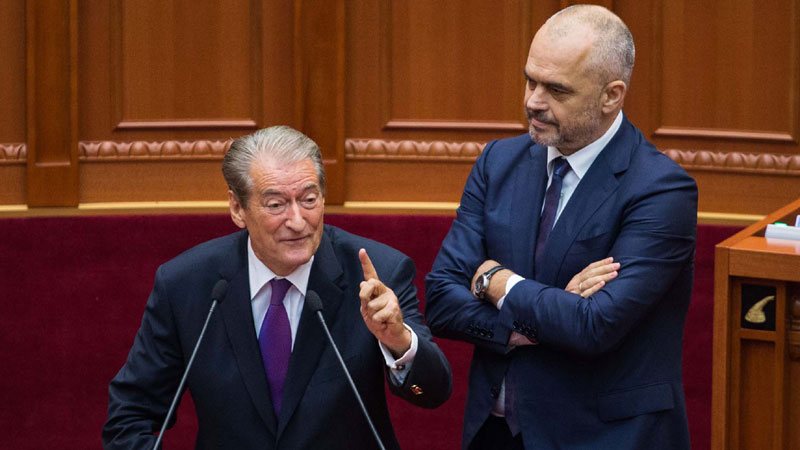 Former Prime Minister Sali Berisha spoke in communication with journalists about the files of the former State Security where he emphasized that Edi Rama removed the lustration law. He said that in 2015, Rama undertook to draft the law, but removing lustration. Berisha also stopped at the declaration non grata, stressing that Edi Rama is hopeless.

"In 1996 and 2008, the Democratic Party voted in the parliament the lustration law, according to which all those who have been security collaborators should be removed from their positions as elected officials or in the justice system. This law was fully implemented in 1996. It was amended a year later by SP. It was not cancelled, but the lustration that he did for me was removed, it invalidated the law. In 2008 we brought back the same law. Because the Constitutional Court of Albania held it.

It had international approval in the sense that the president of Czechoslovakia had drafted it for the first time. In 2008, we returned to that law again. We voted for it, but the Constitutional Court unfairly canceled it, having 5 of its members in a conflict of interest. The Constitutional Court also authorized it. Edi Rama was the one who sued the law. This law recognizes the right of every Albanian citizen to know his file.

Everyone, with or without a file, had the right to ask to be acquainted with it. In this respect, the law was completely transparent. It was not an unclassifiable document. The law was canceled and in 2015 Edi Rama undertook to draft the law but without lustration. More or less it cannot be denied. Chose the German model. The German model does not have lustration.

I have met the head of this institution. DP has been, is and will remain the initiator of any form of lustration. We are for every citizen to have the right to know his file. Anyone but him. No one has the right to deal with someone more than the law provides. As for non grata, Europe has its own laws. I have no impression of it. Edi Rama is hopeless", said Berisha.

Kokalari does not hold back, attacks Berisha and accuses Çim Peka

The pulpit explodes against Yuri Kim: the USA welcomed you as a refugee or ungrateful, but you think like Beqir Balluku and Kristaq Rama

Tabaku attacks the government: Rama will increase the price of energy on November 1, the middle class is burdened, Albania should have been a leader in the region

The unauthorized floors that have covered Tirana/ Rama is asked about the oligarchs and excuses himself by raising his voice: There is no creature except God who conditions me. "Bir mother son" what has been done to this city by those who open their mo...

Towers and floors without permission/ Rama is asked if he is playing a "double game": Nobody can catch me with money, and for me...

Rama changes his mind and determines the month: This is when the energy bandage will be applied