"The future of the Albanian nation in danger", Berisha from Berat: Open Balkans Serbian project to counterbalance non-integration 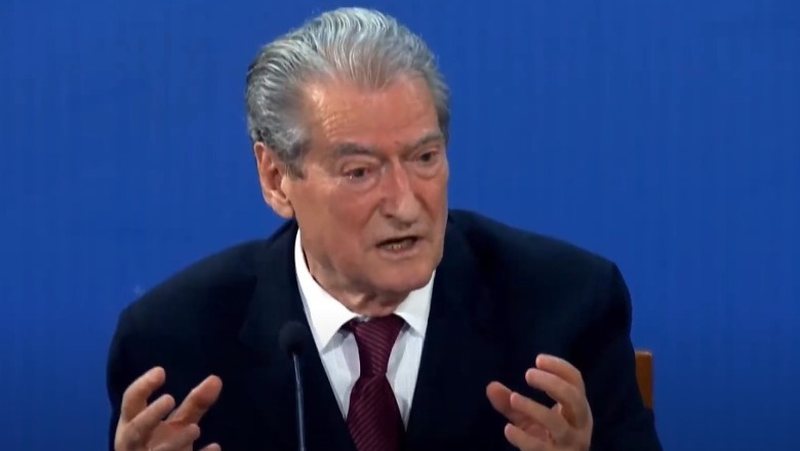 Former Prime Minister Sali Berisha met today with the Democrats in Berat, in the framework of the elections for the leader of the Democratic Party, where he made an analysis of what has happened to Albania since the Ottoman occupation until today.

He explained that the future of the Albanian nation is in danger, as long as the young people of this country leave every day, while the new babies that are born, are obliged to pay the debts taken by this government.

"Berat is a city of thousands of years, but if we go to the past, let us not forget that for 600 years the emperor did everything not that we were not with school but in the Ottoman schools our language was not taught.

We were the only ones in the empire who could not learn our language. Even without books, thanks to our language, Skanderbeg, our culture that was created in every vote, we survived.

The same thing happened in the dictatorship that the new man had to be created. We were called neither east nor west, that the west could not accept such a dictatorship, but what were we?

We walked until 2013, we walked with an unstoppable step until we were granted the status of candidate country that was blocked by Rama with 3 laws.

We have been where we were for 9 years. I say this to remind us of our mission.

Today we are more than ever threatened with non-integration. Instead of following the requirements and standards that make Albanians more worthy and closer to Europe, we followed Istanbul and Belgrade. We Turks have friends but we have the nord in Brussels. We are heading to Brussels, there is our soul and the soul of our renaissance. So Naimi said: for Albanians the sun rises in the west.

Edi Rama, a charlatan, irresponsible said a week ago in Brussels that if the negotiations are not opened, I will see a change in the direction of Albania. As if he has his own loot, as if our destinies and the fate of our youth are in the hands of an adventurer who has no norms or morals. And why this? He goes to the table and starts singing hymns to Vuçii.. What is Vucic? is the elected president of Serbia but has a big problem that he does not recognize the genocide in Bosnia. Which Europe cannot overcome. A genocide sanctioned by two international courts.

Knowing that it will fall somewhere without it, it connects with Russia, China with whomever it wants, but what do we have to do with it. Why should we follow his dance, set our own interests. Europe has set up a Berlin process to bring it closer. This is what the Open Balkans says, this initiative is not in line with integration.

In a story of a Turkish writer it is told that a Sultan called a scholarly efendi, told him how does a nation become?

He said what I need. and then he explained to her, it is enough for people to say what I need or to make them say what I need, and there is no longer any reaction either to the theft or to anything.

"We have a very harmful saying: Albania cannot be made by Albanians", but only Albanians can make Albania ", said Berisha.