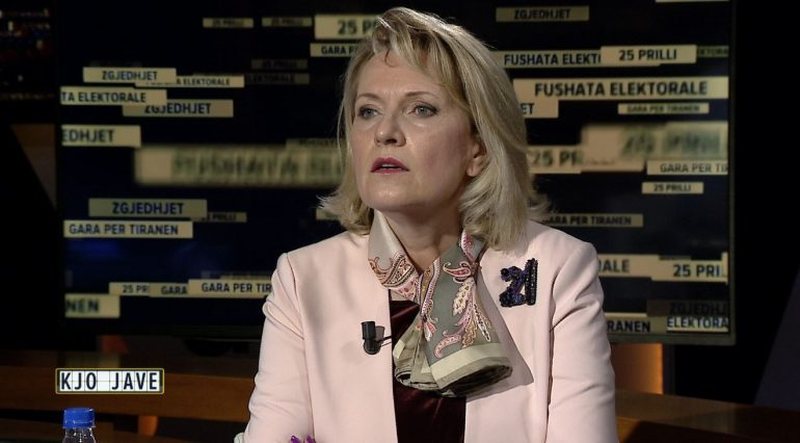 The SP candidate in Tirana, former minister and MP Mimi Kodheli has spoken about her 21st placement in the list of the capital.

Kodheli expressed his conviction for taking the mandate and why it is below the red line and convinced that he will break the quotient, emphasizing that there is popular support.

"I believe, I judge that outside the safe band is a relative notion today because the electoral code has changed and the position of the safe line is also relativized. I believe so, I will break it. I become more and more convinced every day when I realize the popular support I have. If I was once convinced at first I will be so until the last day.

I am a person with feet on the ground, I do not say things that have hyperbole inside. I try to be inside reality. I will break the quotient, even significantly ", declared Kodheli.

As an old socialist, how does Kodheli feel in this election?

"I come with my experience, with the years I have served the country, the people, I come from important positions. I come with all the regimen or training that this heavy sport gives. I come with my debates in parliament but definitely with the values ??I have as a person, the morals I have. I have the right to mention these as two things that characterize me. So I am at peace and quiet. "It makes me not be in that anxiety, in that agitation that people have during campaign periods, but it makes me conscious to maintain the political level I have maintained so far," she said.

Kodheli revealed that before the meeting of the presidency that made public the list of SP candidates, there had been a discussion with Prime Minister Edi Rama and that she was probably the only one who did not have a surprise afterwards.

"No no. It was a discussion I had with him a few days ago. I could have been the only person I knew roughly. has been a constructive discussion, I had no surprises on the night of the SP presidency meeting. I talked and discussed with him. I have not been marginalized, all the leaders of the counties have been put in the grip of the limits for victory. The mayor himself has set himself two limits in two counties. "It was a general logic, not just with me," she said.