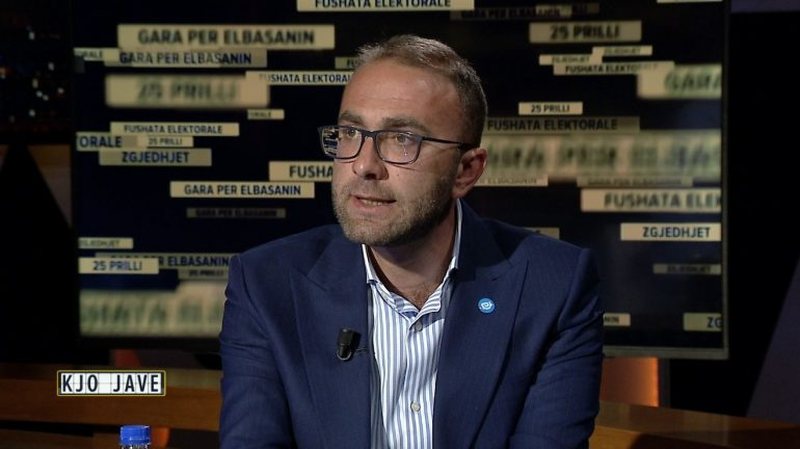 DP candidate for MP in Elbasan Gazment Bardhi was today invited to the show "This Week" where he spoke about the campaign and the pre-election situation in Elbasan. Bardhi said that there is an impatience of citizens for change and an awareness of mass participation in these elections and to vote for a better future for their children and to change the situation where Elbasan is.

He also spoke about the expectations of the results of the DP and the right-wing coalition in these elections in the district of Elbasan, emphasizing that the objective is to overcome the result of 2009, where the DP won 7 seats.

"There is an attempt by those who have benefited to preserve the illegal privileges. "DP and I are committed to guarantee free and fair elections and to lead the citizens towards change on April 26", said Bardhi.

Regarding the problems in this county, he said that poverty is reduced cross-legged in every family, in all the municipalities of the county. "INSTAT data confirm that Elbasan is number 1 for the level of unemployed and poverty. There is a degradation of agriculture and livestock due to the lack of government attention. "70% of the roads are in a miserable condition," he said.

Asked if the DP will come to power, what are the things that would change in Elbasan for the first 100 days, he said it is a big deal.

"Of course we will come with a vote and starting from the 26th we have a job that is a real challenge for everyone who competes. The challenge of the DP leader Lulzim Basha and all of us is what comes after the 25th. We have promised change and we must make the change a reality. We must turn our attention to the need of the Albanian farmer and peasant for support of agriculture and livestock. "Rural areas should help with the infrastructure that has remained in the country for the last 8 years", said Bardhi.

The Secretary General of the Democratic Party stressed that the opposition does not make commitments that it cannot make, but those that are calculated with the financial costs to be realized within a mandate have been taken.

Regarding the opening of negotiations, a promise of the leader of the Democratic Party Lulzim Basha, Bardhi said that it is completely feasible. "We have 15 conditions, if one of them is the unconditional fight against organized crime, we have the will to fight it. We have not based this campaign on crime as our opponent does. we have the determination to crack down on organized crime, corruption. During these years we have several reports in the prosecutor's office for corruption cases. There are others waiting to be whitewashed. Our task as a government after the 25th, we do not have in hand to punish corrupt officials, but we have in hand to prepare the files.

We have the will to do so. "If it does not happen in the first 6 months, each of the ministers or senior officials is sitting in that chair to steal himself," he said.

SMI warns of evidence that will reveal the Socialist Party scandal: If SPAK does not give ...