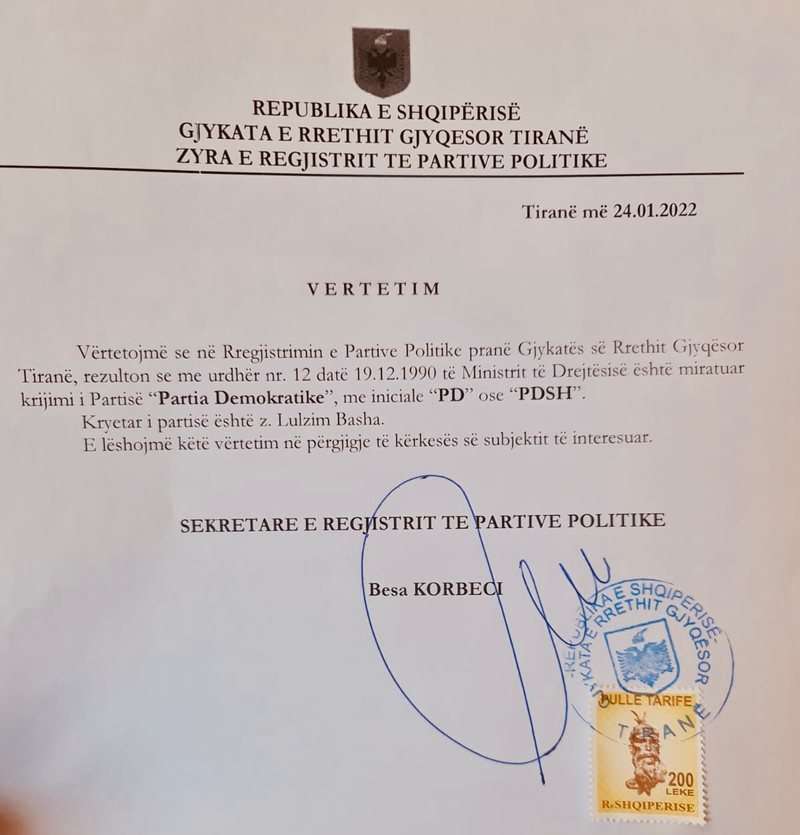 The Tirana court has overthrown former Prime Minister Sali Berisha regarding the debate over the leader of the Democratic Party. Yesterday evening, the Democratic Party sent to the CEC the request to register in the local by-elections and the documentation was accompanied by a certificate from the Court of Tirana. The document is dated 24.01.2022 and it states that the chairman of the Democratic Party is Lulzim Basha. With this move, Berisha seems to be out of the game. Despite the fact that a referendum was held that dismissed Basha and an Assembly was also convened for the court, Basha is the chairman of the Democratic Party and with yesterday's letter he gave a strong blow to the rostrum. Although Berisha is working to send candidates to 6 municipalities, it seems that the DP is familiar with Basha's firm. The signals are that Berisha will go to the independent candidates. But the head of the CEC, Ilirjan Celibashi said a few days ago, according to the law in the Electoral Code, the voters who propose the candidate for mayor must make up 1 percent of the number of voters in the electoral list of the respective municipality. According to Article 68, candidates for local government bodies, nominated by political parties, which do not hold any mandate in the Assembly or in the bodies of the respective local government unit, must be supported by not less than 1 percent of voters. of that unit, but in any case not more than 3,000 and not less than 50 voters. The newspaper has provided how many firms Berisha must gather in each district to run independently and according to estimates it takes about 1600 firms in Shkodra, about 1000 firms in Lushnja, about 2500 firms in Durres, about 300 companies in Vora and Rrogozhina while in Debar about 600 companies. Meanwhile, yesterday the SP and the SMI were registered at the CEC, which also sent the names of the CEAZ members. From the SP, the request was submitted by the Secretary General, Damian Gjiknuri to the CEC.

On the other hand, Prime Minister Edi Rama continued the meetings with the political leaders of the regions where the local by-elections will take place. Yesterday afternoon, the head of government held a meeting with the political leaders of the SP for the Tirana region, Erion Veliaj in the Prime Minister and the deputies of the Tirana region regarding the work for the candidacies of the Municipality of Vora and Rrogozhina. For Vora so far a possible candidate is Mersin Murati, who has been mayor of Tirana. While for Rrogozhina is expected to run the commanding mayor Edison Memolla, but there is still nothing official from the SP. Meanwhile, the Socialist Party has also released the candidates from Lushnja. It is about the incumbent mayor Eriselda Sefa and the doctor Asfloral Haxhiu, however the last word on the candidacies will have the SP Presidency. For the municipality of Lushnja, Democrat leader Lulzim Basha and former Prime Minister Sali Berisha also have two names each. The names of Elton Banos and Darien Xhindoli are being discussed by Basha PD. While from Berisha's grouping, the favorites for the Lushnja race are Arben Zaimi and Nevila Bami. On the other hand, the leader of the Democrats, Lulzim Basha, has decided to be represented by Luan Hoti in Durrës. In the same area, the Commission for Re-establishment of the Democratic Party has nominated Ardian Muka.