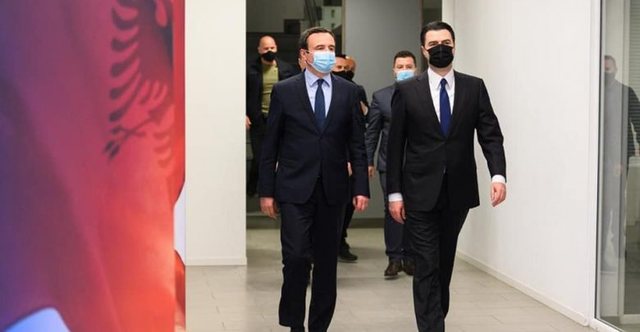 Democrat leader Lulzim Basha received this afternoon at the headquarters of the Democratic Party the elected Prime Minister of Kosovo, Albin Kurti.

Basha has revealed details from the meeting, where he says that in addition to wishing for victory in the elections, he guaranteed that tomorrow, as Prime Minister of Albania, he will do everything to strengthen cooperation between the two countries.

'I received today with pleasure the leader of Vetëvendosje Movement, the incoming Prime Minister of Kosovo Albin Kurti. I congratulated him on the victory of the parliamentary elections and the model that Kosovo gave to Albania and the whole region on the way of organizing the elections, although in pandemic conditions.

We talked about the challenges facing Albania and Kosovo. During the meeting with Mr. Kurti, I underlined the vital need that Albania has for change in the April 25 elections and I assured him that tomorrow, as Prime Minister of Albania, I will do everything to increase and strengthen cooperation with Kosovo in the function of economic development, employment, recognition from countries that have not yet done so and membership in international institutions. '- writes Basha.