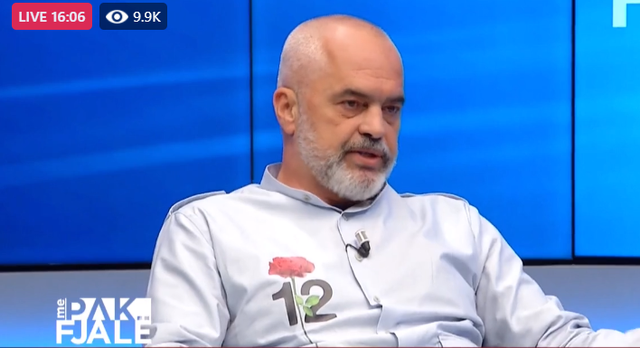 The Socialist Party believes that after April 25 it will form the new government alone. This is what Prime Minister Edi Rama said during an interview on the show "In a few words".

"Let's be realistic. We are facing a conglomeration of forces and parties, which are bound together by an oath: To get rid of Edi Rama. It's very easy. I see no other way but for us to create a majority enough to govern and continue the things we need to do, the many things that were slowed down due to the interplay between the earthquake and the pandemic, and many other things that "They are already enabled on the basis we have set," he said.

He emphasizes that he does not see intermediate forces in these elections, because according to Rama all parties have come together to remove the Socialist Party from the government.

"It is a theoretical hypothesis and it seems unrealistic to me and it is useless to discuss it, because I am telling you again that we are facing a conglomerate, which was created with the opportunism of being all together to remove Edi Rama and remove the SP from government. There are no intermediate forces, but they are forces that rumble in one direction. "I do not see intermediate forces," he said.

When will we go to early elections? Grida Duma warns of a major turning point in Albanian politics