Meta reports to SPAK the members of the Files Authority, the institution reacts "flame for flame": Insulting statements are prohibited by law! 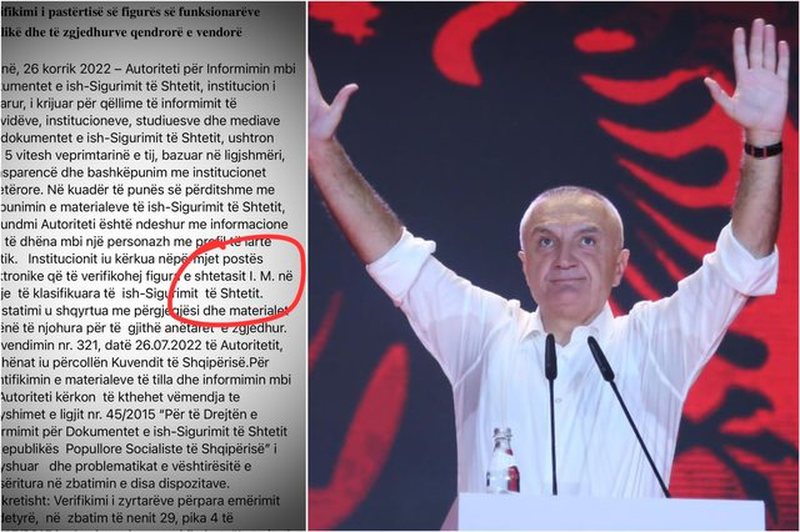 The Authority for Information on the Documents of the former State Security called Ilir Meta's statements insulting, where the latter said that he reported to SPAK the members of the Authority of the files. This institution said that Meta has repeatedly used insulting words, which is prohibited by law.

"The Authority for Information on Former State Security Documents repeatedly notes, with regret, that the language used by Mr. Ilir Metaj in the media is insulting and violates the dignity of each of the members of the Authority. Insult against the morals and dignity of the person is provided as a criminal offense in the Criminal Code of the Republic of Albania, amended, article 119, paragraph 2, which provides that: 'And this offense, when it is committed universally, to the detriment of several persons more than once, constitutes a criminal misdemeanor and is punishable by a fine from fifty thousand to three million lek", the statement says.

This institution said that the law enforcement institutions, including the institutions where the criminal complaint was filed against the members of the Authority (SPAK), should be allowed to perform their duties in this regard.

"The authority is open to cooperation with any subject and all interested parties, as well as guarantees the public for carrying out its activities with integrity, legality and effectiveness, outside the political influence, for information on the documents of the former State Security, through a the democratic and transparent process, the protection of the personality of the individual, as well as the unity of national reconciliation", it is further stated.

Meta has denied that he was a spy for the State Security, accusing the Files Authority of having manipulated documents. He seems to have found access to part of the former security file, which he marks with the initials of a spy IM and is accused of spying on a classmate during the dictatorship years. Meta (Metaj) also published an anonymous email that reached the Security Files Authority on July 25, where he says that this is enough and has set the Files Authority in motion to prove whether the former President was an accomplice of the former State Security. For this reason, Meta made a criminal report to SPAK and the Prosecutor's Office of Tirana for the members of the File Authority.