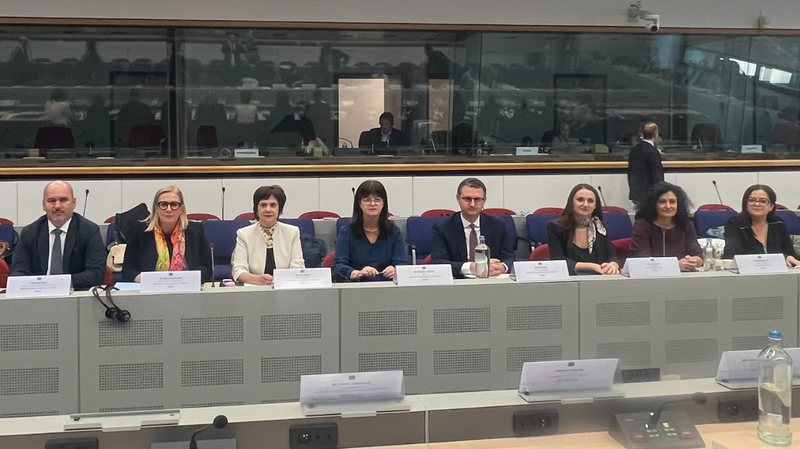 After the official opening of negotiations with the European Union in July of this year, Albania has started with the chapter negotiation phase. Today in Brussels, explanatory meetings were held for chapter 9, "Financial services", where the Financial Supervision Authority is the leading institution. The authority was represented by the General Executive Director, Mr. Ervin Mete, in the capacity of the negotiator of chapter 9, where the Bank of Albania, the Deposit Insurance Agency and the Institute of Statistics are included as contributing institutions.

During the meetings with the experts of the European Commission, it was emphasized that it is essential to prepare for the negotiation process of the chapters and the further alignment of the Albanian legislation with the EU acquis.

The meeting was opened by the Head of the team for Albania in the General Directorate of Neighborhood and Enlargement in the European Commission, Mr. Vincent Rey, as well as from the welcoming words of Mrs. Majlinda Dhuka, Minister of State and Chief Negotiator of Albania, as well as Mrs. Drita Abdiu Halili, Deputy Chief Negotiator of North Macedonia.

Further, the experts of the European Commission made a presentation of the directives and requirements that Albania must fulfill regarding chapter 9 "Financial Services". Presentations by European experts focused on European Regulations and Directives for banks and financial conglomerates, financial market infrastructure, capital markets and investment services, insurance and sustainable finance.

Acquis in chapter 9 regulates financial services in the banking field, that of insurance, voluntary pensions, investment services and securities markets, where the Authority supervises most of these markets, while the Bank of Albania supervises the banking sector.

During the last years, a significant part of the laws for the markets under the supervision of the Authority has been changed, aligning them with the Directives and the European legal framework. In 2020, new laws were approved for capital markets, collective investment undertakings, as well as for financial markets based on distributed ledger technology. While in 2021, the new law on mandatory insurance in the transport sector was approved. The new draft law on private pension funds is awaiting approval by the Council of Ministers.

The legal and regulatory progress undertaken by the Authority was also highlighted in the last Progress Report of the European Commission, published in 2021. In the findings of Chapter 9 "Financial Services", the report states that "progress has been made in relation to the recommendations of last year through the adoption of the law on compulsory insurance in the transport sector".