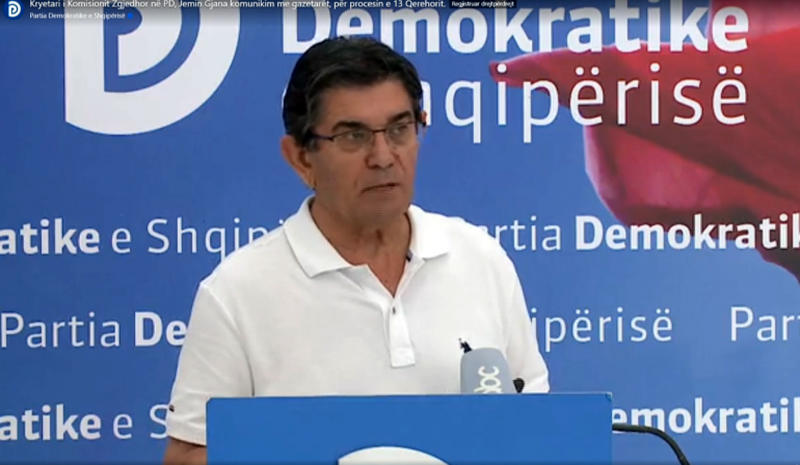 DP will hold elections for chairman tomorrow, while the Chairman of the Election Commission, Jemin Gjana, announced that the list, not final, of the representatives of the candidates in the commission has been approved.

In a statement to the media, Gjana said that it is Fatbardh Kadilli and Edith Harxhi who have not yet submitted their list and that there will be a meeting of the Commission in the afternoon. Gjana stressed that he will not be part of the voting or counting commissions, no one who will not be a member of the party and does not belong to the branch in which he is charged.

"As soon as we finished one of the committee meetings, we approved the incomplete list, because they are not representatives for all committees. Candidate Kadilli has brought his representatives from 76 to 54 committees, they approved the list after we verified being members in the system and within the branch in which he was charged to be part of the commission.The only one who has reacted so far has been Mr. Kadili who are preparing the list and it is thought that they will submit it in the afternoon, we are forced to reconvene in the afternoon, I have no communication from Ms. Harxhi's staff. No name will be part of the voting and counting commission in the 76 nationwide commissions that will not be a party member and does not belong to the branch where he or she is charged."I call on the commissions to be formed as soon as possible so that they can be connected with each other and tomorrow all the polling stations will be ready to be open," he said.
Gjana clarified that in case the candidates do not mention the names of their representatives, the elections will take place anyway.

"If there are cases that will not be sent, it does not mean that the process will not start. All election material has been sent to all constituencies. Candidates who do not bring names have their responsibility, the Commission does not appoint representatives of candidates ", added Gjana.

The situation between the socialists is heating up / Petro Koçi responds 'flame for flame' Artan Lames: Corruption should stay away from institutions, there are cases when someone should be taken to SPAK!