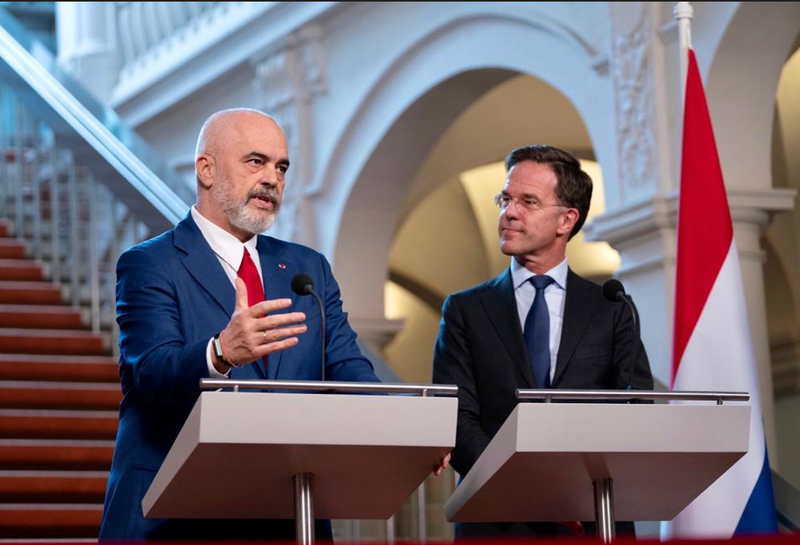 Prime Minister Edi Rama is on an official visit to the Netherlands, while yesterday he paid a visit to the International Court of Justice, where he was received by Vice President Kirill Gevorgian. Thanking the authorities of the International Court of Justice (ICJ) for the reception, Prime Minister Rama also spoke about the open sea issue between Albania and Greece, as he emphasized that the parties are working to keep their commitment to move forward in this direction. "Albania stands by the idea that presenting the issue of maritime areas with Greece before the International Court of Justice, to be resolved based on legal principles, serves the interest of both parties. But before taking this step, we need to reach the necessary agreement to take this case to the ICJ, and this agreement has not yet been reached. As you may know, this is not merely an agreement procedure between the lawyers and technical experts of each party. Our respective teams at the relevant ministries are working and we remain committed to moving in this direction", he declared.

Then Prime Minister Edi Rama also commented on the issue of European integration, as he emphasized that it would be a big mistake if North Macedonia did not accept the proposal of the French president, Emmanuel Macron, regarding the resolution of the impasse with Bulgaria. During an interview for "Kanal 5" television in Skopje, Rama appealed to the leaders of North Macedonia to accept the proposal that paves the way for the negotiation process for Tirana and Skopje. Rama clarified that he is not asking his North Macedonian counterpart to accept this proposal that Albania will face difficulties. According to him, this is about choices and now the time has come for Skopje to make the choice. However, Prime Minister Rama said during the interview for Macedonian television that he respects Bulgaria and the Bulgarian people. but expressed the opinion that the issue with North Macedonia should not be part of the road to the EU. "It's about choices and now is the time to make the choice. My instinct and humble opinion tells me that it would be a big mistake not to accept it. It would be a big mistake because the country could be left far behind and no one will have the will to go back and imagine gathering all the countries together, so don't do it, just don't do it," he said.

The Albanian Prime Minister is expected by his Dutch counterpart

Meanwhile, Prime Minister Edi Rama held a meeting with his Dutch counterpart, Mark Rutte. At the joint press conference in Amsterdam with Dutch Prime Minister Mark Rutte, Prime Minister Edi Rama emphasized that Serbia should not be left on the side of Russia. "Regarding the Open Balkans, I have spoken with Mark and other leaders. The Balkans is the most vulnerable part of the chain that can be affected and is far from being broken as a result of the war in Ukraine and on the eastern side. Russia has a clear influence inside, there are some traditional ties. Therefore, I believe that we should take Serbia with us and not let it go the other way. The Open Balkans has helped, and so has the attitude to say things, to encourage Serbia to become a part and harmonize with the sanctions, but on the other hand to understand that it needs time, this is the right attitude", he said. Meanwhile, Prime Minister Edi Rama said that the cooperation between Albania and the Netherlands is excellent, while emphasizing that it is the country with the largest investments in Albania. "We see more of Holland in our country. The Netherlands is ranked among the biggest investors in Albania, we have Shell, hopefully we expect good news, at the beginning of the year, thanks to a Shell research in our country, if it will be like this we will have the opportunity to celebrate energy and new resources ", underlined Rama.