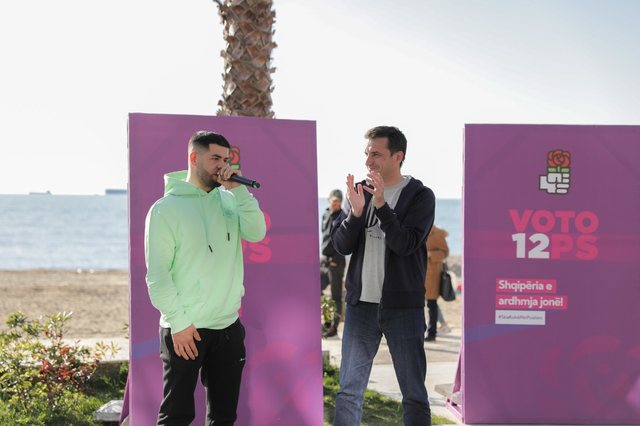 Rigels Rajku, also known by his stage name Noizy, has joined the Socialist Party campaign. The well-known singer and much loved by the public has appeared alongside the Mayor, Erion Veliaj, who leads the entire campaign of the SP of the Tirana region in one of the electoral meetings held in Kavaja.

The famous rapper has stated that Albania can not stop, nor turn back, but must continue forward on the path paved in these 8 years by the Socialists, while he has not hidden his personal support for the mayor of Tirana.

"It's time to move on! We as Albanians do not have the opportunity to go back. We are a state that is being built every day and youth is one of the most important things we need to support. As Lali Eri said that we should work hard, we should only have positivity in our lives. I have had support not only politically but also as a friend and that is why I came here today to support him. Let me tell you, what you have done for Albania these 8 years has really been to be admired, something that Albania has actually needed. I wish you win, because as I said, we can not go back. It's time to move on, and only you can do that. Good luck and thank you all for supporting my friend, my friend Erion, "said rap star Rigels Rajku.

Mayor Veliaj, appreciating the public support he is giving to the Socialist Party, said that Noizy is a product of artists who have succeeded in life themselves.