DP censors the video, the images are published where the employee "puts her shoulders behind the wall" Këlliç and Ina Zhupa 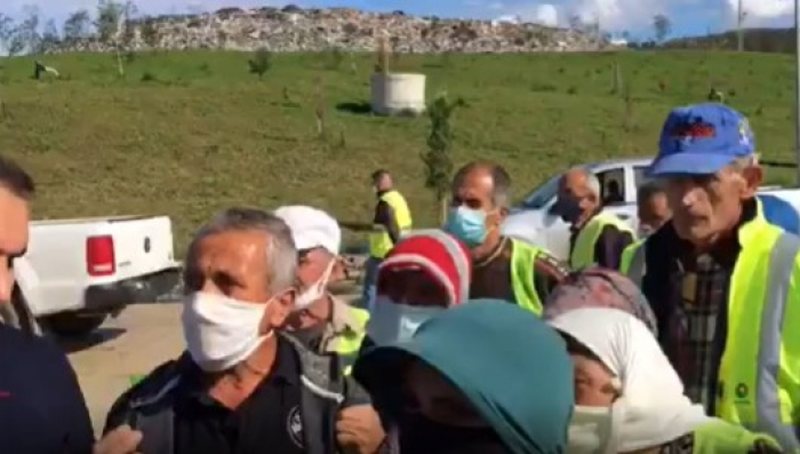 DP spokeswoman Ina Zhupa and FRPD leader Belind Këlliçi have filed a report with the Tirana Police after the event that took place a few hours ago in the Sharra Landfill. They denounced that they were obstructed by mafia orders, and even say that they were blackmailed and threatened.

But the video published by the Democratic Party was not complete, as a part was deleted where the workers accused the leader of the PD, Lulzim Basha, that in his time they worked with 30 lek.

Lanfill employees addressed Këlliç and Zhupa with the words: "Where were you when we worked with 30 lekë in the time of Lulzim Basha"?

Excerpts from the debate

Employee: when the PD was in power what did it do

Këlliçi: There is a disconnection hour, there is no campaign connection, where is the campaign? Employee: When it was Lulzim Basha, why didn't you come here to mourn us. I had it at the door of the house, the smell of filth was coming! I was paid 30 lek ".

Employee: I worked with Lulzim Basha, I was paid 30 lek

Jozefina Topalli: This is what the Movement for Change aims at, the problem of the DP lies with the leadership, I will face everyone

Fatos Klosi: Berisha is playing a double game, his conscience kills him for Topalli's departure, Basha is sending messages that he should leave

Discussions in the group of SP, LSI and Berisha become clear The main focus of the Socialists, the pink headquarters takes in "protection" Basha

Bureaucracy against the Bureau of Investigation, US cut: Recruitment of BKH investigators based on merit, we support the process

The law on the police is approved, the wiretapping and surveillance by the staff, the SPAK and the prosecution have a role only in instruction

The opening of negotiations divides the EU into two parts, Albania and Northern Macedonia away from the positive signal, here are the countries that are against

Rescue of 4 minors from Syria, Lleshaj: We detached from the clutches 4 future terrorists, adults will face justice

Internationals all in support of SPAK and BKH, Italian ambassador meets Kraja and Hajnaj, optimistic about the new justice

Debate in Parliament on reconstruction, Arben Ahmetaj: Here is the program we have, everything with transparency and correctness

Kreshnik Spahiu: Here are the 3 decisions that Jozefina Topalli should take, aim to become prime minister and not MP