"For 8 years Rama did nothing", Floriana Garo attacks the Prime Minister: Only Basha will bring change, together with foreign experts he has planned ... 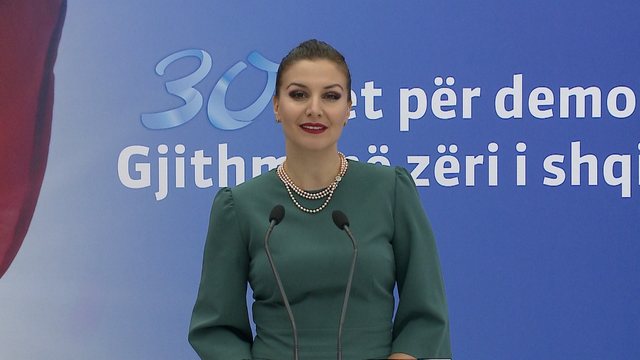 Democratic Party campaign spokeswoman Floriana Garo through a statement to the media says that only Lulzim Basha can bring change in Albania.

Garo emphasizes that for eight years the Prime Minister Edi Rama distributed empty promises and did nothing and according to her Basha has formulated a plan in cooperation with an international team of experts, which will bring salary increases.

We all understand that Albania needs change!

The question of these elections is "who will bring change and who will return hope to Albania?"

For 8 years, Rama delivered empty promises and did nothing.

Rama is not allowing our families to earn a decent living, so we have hundreds of thousands of unemployed and the lowest minimum wage in Europe.

Rama has forced hundreds of thousands of young people to leave Albania. This completely ruins the future of our country.

Rama is the problem and the failure of Albania - he will not bring us change!

Basha is the one who joined us in NATO. Basha released us from the obligation to obtain an entry visa in the Schengen area. Basha will also join us in the EU.

Basha has formulated a plan in collaboration with an international team of experts. This plan will increase the minimum wage to 360 thousand ALL, will create 110 thousand jobs and will enable our families a dignified life.

Basha will open education and employment opportunities for our young people. It will stop the flight of young people and give them a reason to return to their dear country - Albania.

On April 25, the Democratic Party led by Basha and the Alliance for Change will bring hope to Albania.

Rama-Basha race, Patozi bluntly says before April 25: I am afraid I will…

Alfred Peza reveals the behind the scenes: I tell you why Ilir Meta goes to Vlora! There are deputies who are no longer with the SMI ...

Bushati reveals the behind the scenes to the Democrats: PD is spreading fear, why does not Berisha come out to get the vaccine?

Sali Berisha reveals Rama's sudden move after April 25: He will escape to ...

April 25 / Agron Duka warns: Votes are being bought, soon PD will come out with names!

Sali Berisha surprises with the statement: I would do the PD list differently, it differs a lot from that of 2017 which ...

The issue of personal data in e-Albania, warns the well-known analyst: There will be a storm before the elections!

"I do not deal with spies of the former State Security", a quarrel broke out on the show, Frrok Çupi makes the drastic decision for the well-known journalist: Why do you act as strong? With me be careful ...

He invited him to a public debate, Basha bites Prime Minister Rama: He is leaving, that is why he is afraid of confrontation!

The well-known former MP brings out the strong behind the scenes, shows the "earthquake" that has fallen inside the SMI, reveals the well-known figure they want to remove from the party: There is a clash with Ilir Meta

Decline in the number of infected, the chairwoman of the Committee of Experts has an appeal to political parties shortly before April 25