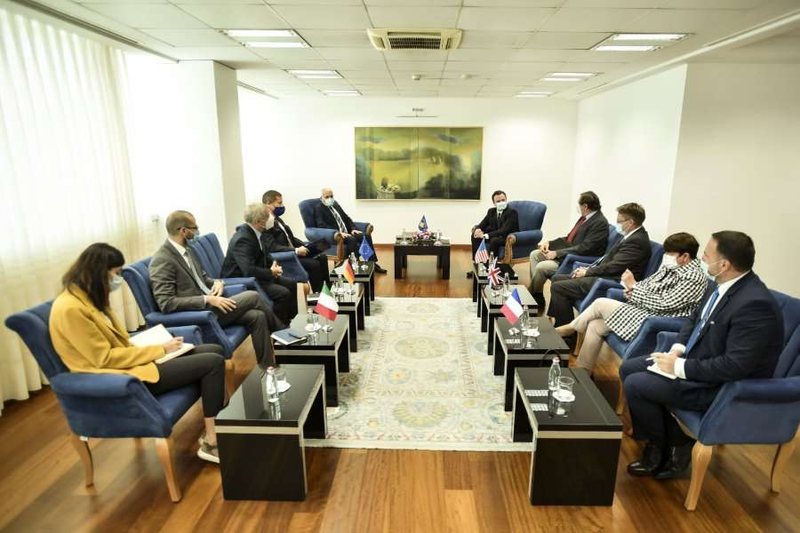 The meeting between the ambassadors and the Prime Minister of Kosovo has just ended. After the end, the government of Kosovo reacted by giving details on the topics that were discussed.

The Prime Minister of the Republic of Kosovo, Mr. Albin Kurti, together with the Minister of Internal Affairs, Mr. Xhelal Sveçla, received in a meeting the ambassadors of the Quint countries and the head of the European Union Office in Kosovo: the charge d'affaires at the Embassy of the United States of America, Mr. Nicholas Giacobbe, Ambassador of Germany, Mr. Joern Rohde, Ambassador of the United Kingdom, Mr. Nicholas Abbott, Ambassador of France, Mrs. Marie-Christine Butel, Deputy Chief of Mission of Italy in Kosovo, Mr. Mr. Ugo Ferrero, and the Special Representative and Head of the European Union Mission in Kosovo, Mr. Thomas Szunyog.

In this meeting, it was discussed about yesterday's decision regarding the provision of temporary license plates for vehicles bearing Serbian license plates and entering the territory of the Republic of Kosovo.

Prime Minister Kurti informed the ambassadors that there were no incidents at any border crossing yesterday and today. He said that yesterday's decision is neither provocation nor discrimination against anyone and that the Kosovo Police has been and is professional, correct and efficient.

The law has been implemented, equal treatment is ensured, said the Prime Minister, emphasizing that special units are there only to protect the border police and border crossings. Their current presence is there because dozens of protesters have blocked the roads leading to border points 1 and 31 and in their vicinity. Police talked with the protesters and did not violate them, said Prime Minister Kurti, adding that freedom of movement is fair and worth not being violated.

He also informed the ambassadors about the telephone conversation he had last night with the Vice President of the European Commission and the EU High Representative for Foreign Affairs and Security Policy, Mr. Josep Borrell.

Minister Sveçla said that our police officers are at the level of duty and are contributing to maintaining order and security. Serbian citizens do not have to feel scared, he stressed. The measures taken are not against them nor against anyone else. The police do not deal with the nationality of the passengers. It protects and respects all citizens without distinction, said the minister.

The ambassadors and Prime Minister Kurti agreed that peace and tranquility, stability and security must be maintained, and that dialogue must continue and the situation must escalate.