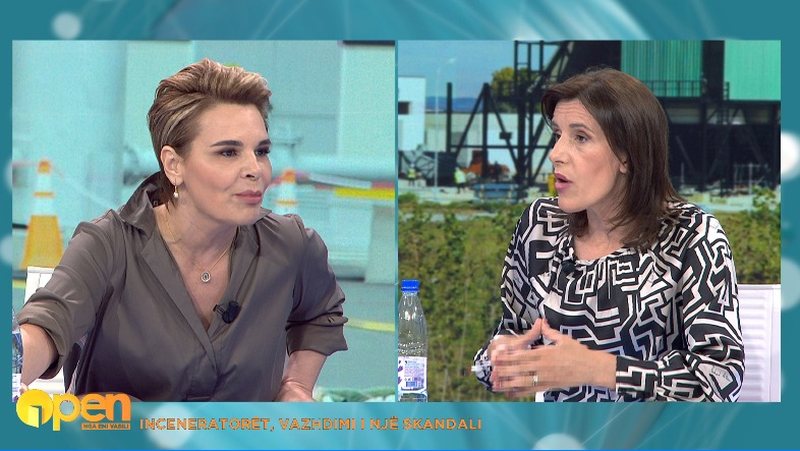 The debate between LSI president Monika Kryemadhi and journalist Klodiana Lala was fierce today in 'Open' on the issue of incinerators. Kryemadhi ironically admitted that she was partly to blame for being part of the government with Rama.

PART OF THE DEBATE
Kryemadhi: Regarding the matter you said; you were in government. Yes, we have been. As long as we have been in government, we fell to the level of corruption for 25 years. I take over what happened.
Lala: Admit you were wrong?
Kryemadhi: I haven't finished my opinion. Don't make noise
Lala: I'm looking did you make a mistake?
Chief: Let me speak. These millions were stolen by Edi Rama and Veliaj.
Lala: Your political mission….
Kryemadhi: Can I finish Annie? I'm to blame, I'm to blame. But you who made the denunciation, file a lawsuit and sign with your name and surname.

Bogdani: Yes, we are journalists.
Lala: We are journalists who have raised our voice about these issues
Kryemadhi: What have you done Klodi. I thank you very much for the advocacy you do for Klodian Zoto. For the lawyer….
Lala: How do I become a lawyer? Today we are to clarify….
Kryemadhi: Well done to clarify in these 20 minutes. It is a lack of reciprocity....If we are going to talk about how the identity of the elderly is stolen,. or to cover corrupt prosecutors. or if this is done to make a whistleblower, or to close contracts at KKB, then call other people. Then if we went to talk to Klodian Zoto…30 million dollars….
Lala: There are not that many, they should be divided into 5.
Chief: Go to SPAK. You are the spokeswoman for the Prosecutor's Office, I used to take SPAK. Since you Ms. Lala have 5 times more bills, go and deliver them, file a lawsuit. Or give it to me because I do the lawsuits. Why doesn't Klodian Zoto refer to me?
Lala: O Eni, shall I speak to you...
Kryemadhi: No, you will not speak...I will! That I have come here to speak. You who had more bills than me, then hand them over. You had the problem of companies that did tax evasion. I don't fine the firms, ok madam. It's not me, lady. If we were so honest in this story, I have a year and a half…. Here are the companies. Turn your head back. There are 24 companies that have committed tax evasion.
Lala: Asking you a question
Kryemadhi: I'll finish it.