EC President in Tirana, Rama tells what was discussed at the 'head to head' meeting: Yesterday's operation was an example to bring people to justice despite political ties 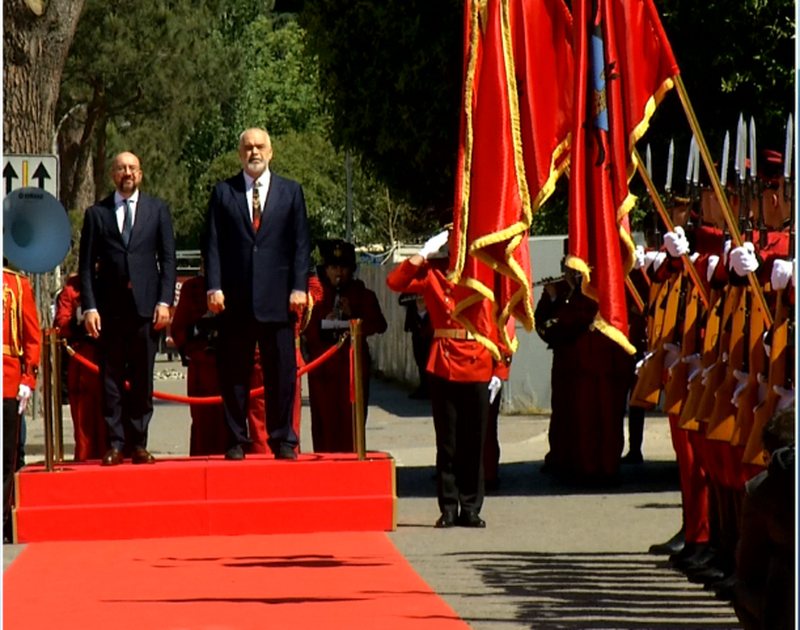 The President of the European Council, Charles Michel has arrived for an official visit to Tirana. He was received by Prime Minister Edi Rama, who left a few minutes before arrival to receive him on the Boulevard.

At 10:30, there was a face-to-face meeting and a meeting of the two delegations.

"We spoke with President Michel about the general situation and the commitments, but also about the challenges in relation to the war in Ukraine. We definitely spoke and I believe that he will communicate in detail about the process ahead of the European Council when it is known that Albania and Macedonia The North is on the agenda for the opening of talks, we talked about the Open Balkans, all the internal challenges of the region, and of course we talked about the reforms in the country, we talked about the Justice Reform that is bearing fruit, everyone attended the operation yesterday very significant special police and State Police to crack down on a criminal network."The operation was a meaningful example to bring people to justice, despite the political connections, which shows that not only are we on the right track, but we have taken significant steps even compared to countries that have opened negotiations," Rama said.

"What did we not talk about" / Lunch today with Ilir Meta, Artan Fuga breaks down: For the history of the Socialist Party that in many points only we know the truth ...

"Intentional anti-national agenda" / President Meta comes out with an extraordinary statement and makes an urgent call: The tragic consequences are felt in every Albanian family!

"The fines will start", Prime Minister Rama: From July 1 ...

The PD deputy comes out with the urgent call for Rama's minister and reveals what will happen tomorrow at 16:00: Take responsibility!

"My sister is one of the founders of the Democratic Party", Erla Mëhilli tells how she knew Sali Berisha and her relationship with the former prime minister

"Incredible" / Kreshnik Spahiu publishes the photo that is being distributed rapidly and reveals the unexpected decision of this businessman: Do you think the reaction is right?

"When you have nothing to do with the donkey, it falls to the Samaritan" / Artan Fuga erupts and utters a 'bluff' Edi Rama: To think that with sexual metaphors ...

"We are good and we are crazy, you better have us with you", the democrat ironizes Rama's statement: We have an international donkey for prime minister

Austrian Chancellor next to Albania for the opening of negotiations: You are very right, we must learn from our history with humility