Rama gives the alarm and sends a message to Meta: Judges and prosecutors are engaged to hold a referendum on April 25, they will answer together with their leader 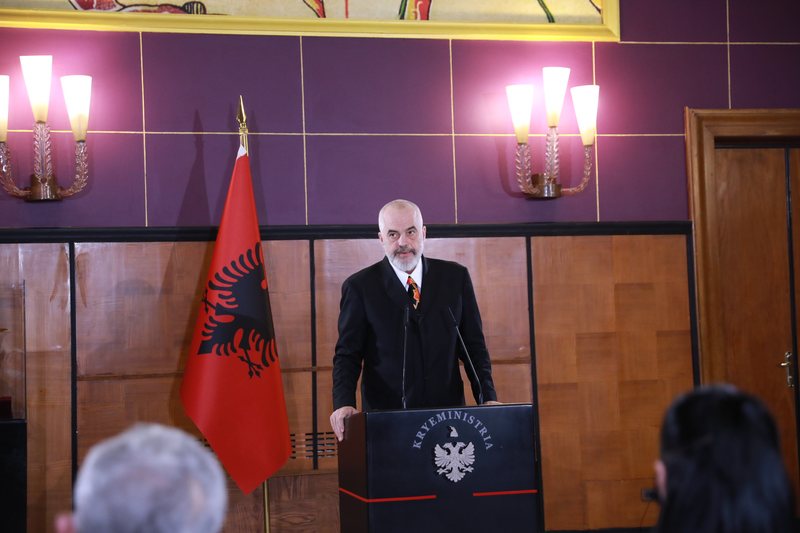 Prime Minister Edi Rama made a very strong statement yesterday. The Prime Minister commemorated yesterday the murder of 4 innocent citizens in the protest of January 21, 2011, while the head of government spoke about a commitment of justice against the government. He blamed the black platoon for not fully whitewashing "January 21", while not sparing criticism of judges and prosecutors. But Rama said that some of them, especially those who have remained in the vetting, are committed to overthrowing the government on April 25. According to Rama, they are working to return April 25 to the referendum, while he warned that everyone will be held accountable, along with those who lead them towards this referendum. "We are still not upside down as long as this process is not over and there is still sludge to clean, but we will definitely look them in the eye for everything we are doing for all their families. Today we hand over to the families the symbol of the "Martyr of the Fatherland" and I am convinced that the presence of that symbol in the 4 houses will be a visible point of reference for the children when they think of their parents, not just in the sense of appreciation. , but of the belief that justice will make it its own. And those who killed them a second time and killed them in collusion with each other with third parties dressed under the black platoon of judges will answer. All judges and prosecutors who are strongly committed today to hold a referendum on April 25 against this government, together with the leader of the referendum, will answer as they will. Pot here is not the time to talk about it. "It's time to move on to giving these symbols." he said. But Rama's statement is a deep message and the suspicions are that they go to President Ilir Meta. The only one who has described April 25 as a referendum is the president. Meanwhile, in his party are engaged candidates who are relatives of people who have remained in the vetting. So it seems that the closer the April 25 elections are, the more the debate is tense, while according to the Prime Minister they are already playing behind the scenes and fired by the vetting.

If we look at the interviews and posts of President Ilir Meta on social networks in recent months, he is the only one talking about the referendum on April 25. For the DP and SP are elections, but Meta has described them as a referendum on whether to go to the EU or beat this government. "On April 25, 2021, there will be a nationwide referendum to overthrow this oligarchic system, which seeks to turn Albanian citizens into worthless, powerless and defenseless beings. The restoration of the constitutional order is indisputable. Constitution above all. "Only the people are above the Constitution", was one of his statements. So it is clear that the message of the Prime Minister was also in the direction of the President. The other element that strengthens this term the most is because the SMI will run in the elections as a candidate the son of the former Chief Prosecutor of Tirana Petrit Fusha. The latter resigned from the post and escaped vetting, while his son is already engaged with the SMI for the April 25 elections. Meanwhile, a few days ago, US Ambassador Yuri Kim issued a clear message that care should be taken with the candidates. When it was said that Gjin Gjoni would be the PD candidate, the ambassador came out with an urgent reaction. But the SMI has deceived by making the former prosecutor's son a candidate.

The CEC takes important decisions, registers the DP coalition and approves the pilot project of electronic voting and counting

'On April 25 to unite for a new covenant', Ilir Meta warns of unexpected developments