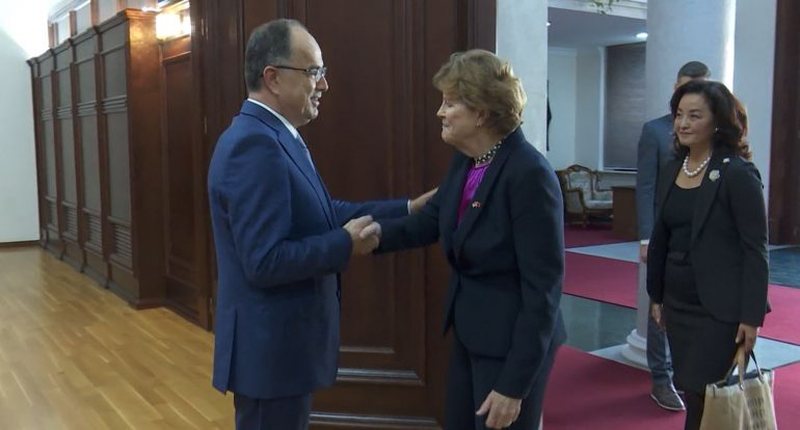 The President of the Republic, Bajram Begaj, received today the American Senator Jeanne Shaheen, who is on an official visit to Albania. Senator Shaheen was accompanied in this meeting by the Ambassador of the United States to Albania, Yuri Kim, as well as representatives from the American Senate.

President Begaj appreciated Senator Shaheen's visit to Tirana as a continuation of the expression of the United States' attention and high interest in Albania and the Albanians, as well as underlining that this visit takes on added value as it takes place within the framework of the 100th anniversary celebrations of diplomatic relations between Albania and the United States of America.

President Begaj underlined that after the Russian military aggression in Ukraine as well as the threats and new challenges facing the world and the current world order, the need for closer cooperation and coordination at all levels becomes even more necessary.

The President of the Republic expressed his gratitude for the support that the United States has given to Albania in the last three decades, as well as particularly appreciated their very significant support in the framework of strengthening the rule of law, the deep reform of justice and the consolidation of institutions democratic.

In particular, President Begaj expressed his gratitude for the immediate assistance provided by specialized agencies of the United States in dealing with cyber attacks by actors associated with Iranian state agencies, which aimed at damaging the infrastructure of online government services and destabilizing the country.

Erion Braçe leaves the mandate? Edi Rama takes out his anger with journalists: Eat a spoonful of honey, then...

"When you take it upon yourself to comment on Braça before you have eaten a spoonful of..."/ The former deputy comments on Rama's statements about the SP deputy: This is why he is afraid of him, the prime minister is scared and...

Brussels demands arrests of politicians, tenders and concessions are targeted by the EU, demands for justice and the government are clarified, a storm is expected in the ranks of the rulers