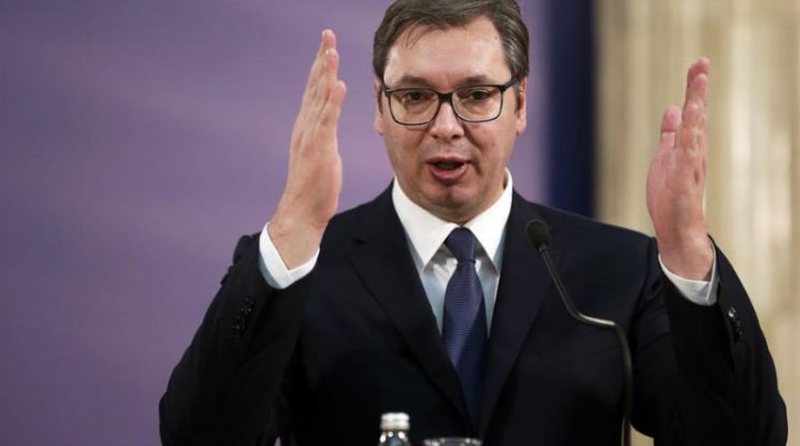 The President of Serbia, Aleksandar Vuiqi., Addressed the Serbian public after the meeting of the National Security Council in Belgrade. According to Serbian media, Vucic said that Serbia demands the withdrawal of all troops stationed in northern Kosovo and an urgent response from the EU to the situation.

Vucic said he received a proposal to resolve the situation at the Jarinje and Brnjak border crossings yesterday, but rejected that proposal, calling it humiliating for Serbia.

At the beginning of his speech before the public, Vuiqi fol spoke about the situation in the Serbian army, as well as in the Ministry of Interior. The Serbian leader said that, among other things, the armament of the army and police was analyzed.

Vuiqiiq called the positioning of special police forces at the border crossings in Jarinje and Brnjak a criminal act to monitor the implementation of the Government's recent decision on reciprocity in the issue of vehicle license plates.

"We have reached conclusions, Serbia will continue to insist on maintaining full peace and security for Serbs in Kosovo and Metohija. We consider inappropriate the statements in which Belgrade and Pristina are equated. "Serbia wants to continue the dialogue, but does not want to accept an agreement on criminal acts," Vucic said.

He added that this morning he talked to the ambassadors of the most powerful Western countries, the ambassadors of Quint, about what a "compromise solution" should look like on this issue, emphasizing that he received an "unacceptable" proposal.

"I rejected that solution because it is not a compromise, but a solution that would humiliate Serbia. It is a solution with which 70% of what the Albanians intended to do in the administrative line, they would forget, but would present 20/30 percent of the measures. I have obtained the consent of the Council for rejection. "I rejected it because I am tired of the politics of the completed act and you cannot talk like that with Serbia," Vucic said.

The meeting of the National Security Council in Serbia was attended by Ministers Nebojsa Stefanovic, Aleksandar Vulin, as well as the Chief of General Staff of the Serbian Army, Milan Mojsilovic, and the Secretary of the BIA, Bratislav Gasic.