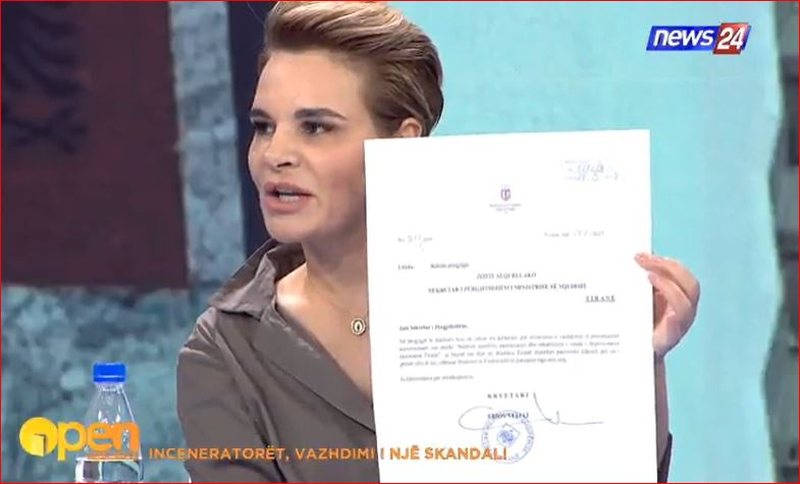 In the "Open" studio, the fiscal evasion scheme with the invoices of the concessionaires of the incinerators was discussed in harsh tones between the head of LSI, Monika Kryemadhi, and journalist Klodiana Lala.

Lala asked Kryemadhi if he has concrete facts and documents that implicate the Mayor of Tirana, Erion Veliaj, Minister Ahmetaj, Prime Minister's Secretary Engjëll Agaçi or even Prime Minister Edi Rama himself in this fraud scheme.

The chairwoman of the LSI revealed that there is evidence that the prime minister is involved in the signing of the incinerators of Tirana and Fier, while she accused the secretary of the Prime Minister's Office, Engjëll Agaçi, that with his direct intervention, he advanced the fraud scheme with the Elbasan incinerator in violation of the law.

Excerpts from the studio discussion:

Klodiana Lala: What is the concrete role of the mayor of Tirana, Erion Veliaj, the deputy prime minister, Arben Ahmetaj and the secretary of the Prime Minister's Office, Engjëll Agaçi, and what documents do you have to accuse them.

Monika Kryemadhi: I know about Engjëll Agaçi that he is at the Elbasan incinerator. The announcement of the winner "Albtech Invest" illegally, which should have been an international procurement, was not done, it was not allowed 40 days as the law requires, so they directly implicate Engjëll Agac and all the ministers who had the legal side of this. For the financial issue, it is Lefter Koka.

There is no firm for Arben Ahmetaj in Elbasan and Fier. I don't know what his implication is in the Tirana incinerator. In Fier, Mr. Subashi knows that he made a statement that he was asked to return the land where the Fier incinerator was built.

Monika Kryemadhi: For Mr. Rama it is simple, that you can follow this line of signatures from the ministries. It is simple enough to deal with the whole matter. Veliaj has a direct financial commitment. As for Edi Rama's abuse of office, this is resolved by SPAK. Rama has only signed two government decisions for the incinerators of Tirana and Fier.