Well-known lawyer Spartak Ngjela has shown what the US leadership will bring to Albania under the name of Joe Biden.

Ngjela says that currently our country is occupied by national anti-historical corruption of the rulers and former rulers.

According to him, with the start of the anti-corruption legal process, which will be strongly guided by the new American policy, everything will change in Albania.

The signs are that they will be magnified, because such has come the time.

Everything has to do with the overthrow of Donald Trump in Washington, because the psychology of high Russian intellect knew that former US President Donald Trump, had come to power from the Russian intelligence service.

What about President Joe Biden, will he influence the overthrow of the last Russian tsar Vladimir Putin? Western democratic analysts think Biden will help on this issue. And, with a normal political judgment, it is certainly acceptable that, under the influence of Joe Biden, the West will take its own steps to overthrow Russia's second tyrant Vladimir, who is to be its last tsar. .

The signs are good.

Everything is moving towards democracy and integral thinking on social justice.

Albania, in fact, is currently occupied by the anti-historical national corruption of the rulers and former rulers.

But now, in this democratic time that comes as a force and as the new doctrine from political Washington, these usurpers and usurpers of Albanian material values, and who are at the same time degraded sellers of national interest, have no hope.

But will they surrender?

"I do not think about an act of handing them over, but about starting the anti-corruption legal process, which will be strongly guided by the new American policy for the democratic re-evaluation of the Western Balkans", writes Spartak Ngjela. 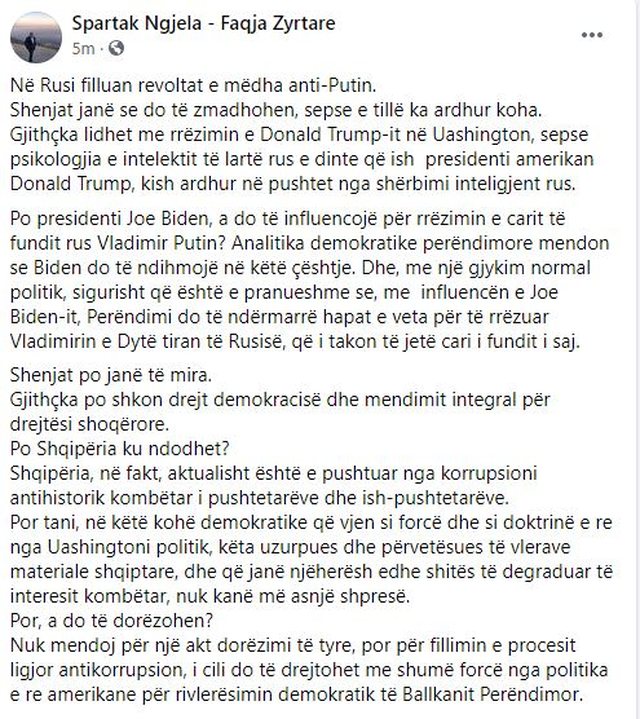 Filmed by his wife behind the wheel of his seat belt, Deputy Minister of Interior has a message for Lulzim Basha

Democrat leader Basha took the wheel but forgot the belt, 'PLAS' humor on the network, here are the photos that are making the rounds on social media

What a surprise! From the well-known actor to the businessman's daughter, the candidates for SP deputies in the Kukës region are revealed (EMRAT)

"They used the data of civil registry persons", the Ministry of Finance is attacked by hackers

They will be candidates for MPs on April 25, these are the first 10 finalists selected through the platform "MP we want" in the Socialist Party (EMRAT)

'On April 25, we will all score together' Agron Duka publishes the photo and 'includes' his brother in the election campaign

What is happening? He will sign the agreement with the Prime Minister tomorrow, Basha makes the unexpected move

Neither PS nor PD, Salianji releases the video and threatens Rama: On April 25 he wins ...

The wife published the photo differently to Lulzim Basha, Erion Braçe reacts 'flame for flame' and catches the serious violation of the leader of the democrat: You are no different from the millet even though you wake up at lunch!

Aspires to be part of the lists for SP deputy, the candidate 'steals' the expression to Prime Minister Rama: I will be a good beggar!