Shkëlzen Berisha on his way to prison, Diveroli's partner discloses details of the deals they made with the former prime minister's son for arms trafficking in Gërdec, here's how the Chinese emblem was manipulated on the cartridges and who was dealing ...

January 21, SPAK declares incompetence for the reports, the movement of the last minutes is revealed 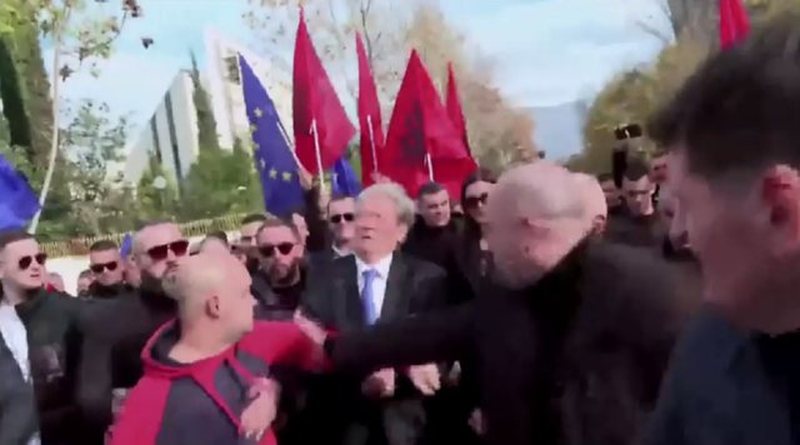 Journalist Armand Shkullaku stated in a TV show that the attack on Sali Berisha is an unprecedented act. As for who is behind this attack, Shkullaku said that it is clearly a premeditated act.

"It happened before, a very serious act, not only related to Berisha, but a blow to the opposition.

If there were more than 2 coincidences, it is no longer a coincidence. Representatives of the majority, in the media and in the government, exaggerated that there will be incidents, etc., etc.

Before that, an alibi was raised by representatives of the majority that Kremlin agents are organizing demonstrations in Tirana.

From Niko Peleshi onwards, imagine. It had long been pregnant with a spirit against opposition and peaceful demonstration. The third coincidence is the fact that you can find Berisha at any time to hit him.

The first thing, on the 12th and 24th, the thing happened, then you said that the crowd will clash with the police. I think it's all of these, but rather the way this event was handled makes me believe it's contrived. As with the Elbasan event, the government," Shkullaku said.

Israeli Ambassador Peleg: Albania and Israel will work together to build a cyber protective 'umbrella', Iran is a terrorist state

Berisha addresses the British ambassador: Your corruption is the cause of the departure of Albanians, Rama follows mafia principles

The housing of Afghans and their integration, the American official comes to Tirana, meeting with Xhaçka: Thank you Albania for the role!

My 7-year-old son died in Gërdec, Zamira Durda: Media should not be tried for abuse of power, my child was killed by the state, I will take the case to Strasbourg

Zef Brozi: It is unbelievable that SPAK's prosecutor appeals the order for the investigation of the Meta-Berisha property, she must answer to the law

February 11 of Berisha, Kadilli: SP leaves with votes, not with a Bolshevik mentality, I see Rama isolated from the West

Berisha: The affair with McGonigal has shaken relations with the US, the February 11 protest was called against Rama who allows himself any act to keep his seat

Zhupa in the Ethics Commission: Examine the request for the dismissal of Nikola, manipulate the votes in the Assembly, the SP deputy voted for his colleague

Salianji: Unprecedented expulsion of 13 DP deputies in one week, on February 11 in the square with the citizens

"Did my face annoy you?"/ Luizi says bluntly who leaves this week from the 'Big Bother Vip' house (VIDEO)

Tea, Dea and Olta are televoting this week and one of them will leave the house ...

"Bledi has started the harassment?"/ "Murderer", Dea Mishel reveals what the journalist told her about the nomination of the group "LEK" (VIDEO)

The "crisis" of friendship with Olta Gixhar has pushed Dea Mishel to find solace...