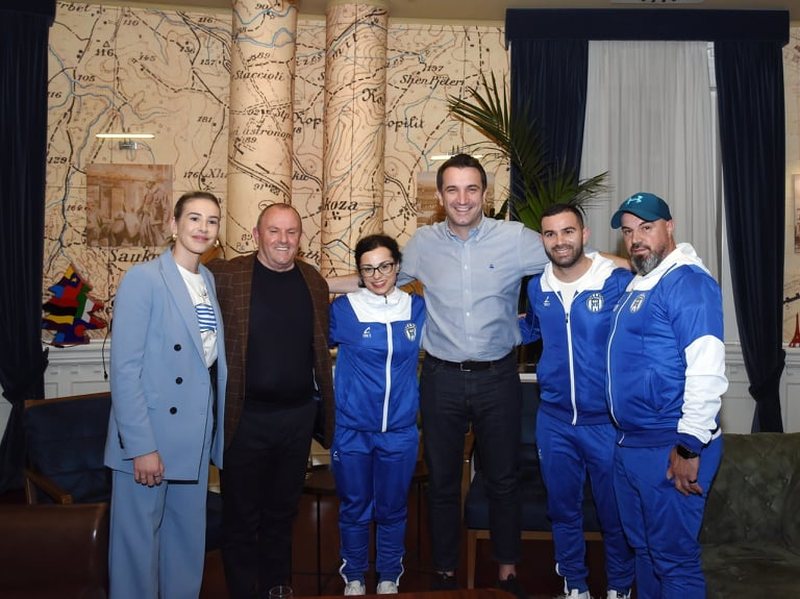 Evangjeli Veli and Briken Çalja will represent Albania at the European Weightlifting Championships in Moscow. The two athletes, together with the President of the Federation, Elez Gjoza, were received by the Mayor of Tirana, Erion Veliaj, to whom he wished success in the competition and to make us proud. The President of the Weightlifting Federation, Elez Gjoza, promised that the two athletes will come with medals from the European Championship. "Thank you for your commitment, for your commitment to the Albanian Weightlifting Federation, not only now, but also earlier," he said.

The Mayor congratulated the athletes, but also the Weightlifting Federation, for the results in the national championship that was held in the city of Durrës, after a year without activities due to the pandemic, where Briken Çalja was declared not only national champion, but also set two new records. national. "I am very proud of our two champions, the men's Briken, who broke not only his national record, but also the European one. I can't wait to see him officially break a record in European competitions. Many congratulations also to Evin, who left Albania as a child, but the fact that she has not forgotten, that she wears the uniform of Tirana, the red and black uniform, makes me feel very proud ", he said.

Veliaj added that in 2022, which will be the year of Tirana - the European Capital of Youth, sport will have a special attention. The two champions thanked the mayor for the great support he is giving to the sport, especially that of weightlifting. "I am proud that we won the championship and that we are the best athletes of the Tirana club, because we had a lot of support", said Veli. "I thank the mayor for his commitment to sports, as well as the Tirana club, because their support translates into the result, which is a good omen for us," said Çalja. "I am very proud that you are model heroes! I look forward to applauding you in future successes! To cross our fingers for what is to come, for the European Championship in Russia, and it would be a great pleasure to keep these results, if not,