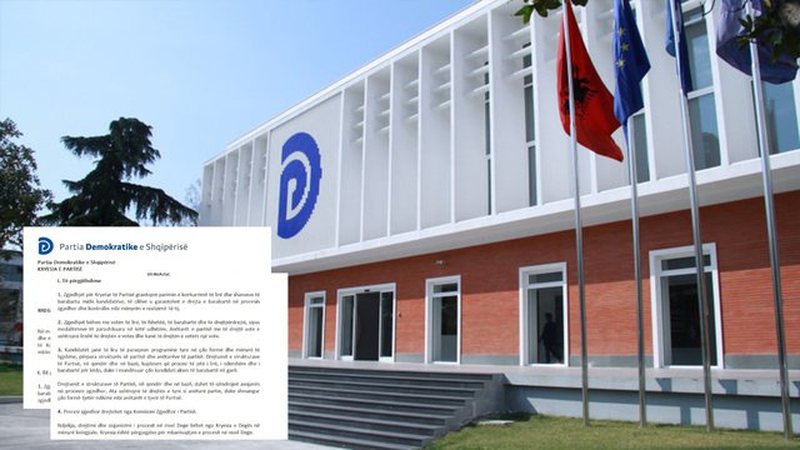 Clashes deepen with Democratic Party leader Lulzim Basha and former Prime Minister Sali Berisha. Since September 16, former Prime Minister Berisha has started a tour of meetings with the democratic base in order to overturn the decision of the leader of the Democrats Lulzim Basha for his expulsion from the PD parliamentary group and the return of democracy in the party. But on the other hand, Mr. Basha has "responded flame for flame" to Berisha's action and accusations, for which he has stated that there is no turning back and that he does not intend to damage relations with the US in the interest of the former prime minister. In parallel, the Democratic Party has intensified meetings at the party base and the parliamentary group, where it has sent some instructions to the branches, which should be shared with the Democrats.

I am using "Foltoren" as a tool of blackmail

But in the circular, which has been part of the discussion in meetings held in various branches of the country this week, the Democratic Party has rejected the claims of former Prime Minister Sali Berisha, that names like Jozefina Topalli, Arben Imami, Astrit Patozi, etc., were expelled in 2017 by the Democratic Party from the leader of the Democrats, Lulzim Basha. According to the instruction that is already known to the base and democrats of Albania, the two former deputy leaders of the Democratic Party Jozefina Topalli and Astrit Patozi, or even the former Minister of Defense, Arben Imami, as well as other prominent figures, were expelled from PD- here from Berisha and not from Basha. "As for the democrats like Topalli, Imami, etc. who attack Basha, you must understand one thing that they exclude Sali Berisha and not Lulzim Basha. And this is clear as they are staying away from Dr. Berisha's Lecturer,

Oerd Bylykbashi shows what is being said inside the US embassy

Gazmend Oketa: Berisha would find it difficult to continue with Foltore if ...

(PHOTO) He takes the oath as mayor / Përparim Rama, emotion with his beautiful gesture, bows down and kisses the hands of his dear man

Initiator of the December '90 movement, Bledi Gonxhe reveals the reason why he left: PD gave birth to a dead child

Përparim Rama swears as mayor of Prishtina, here are the promises he will keep. The statement is clarified

Basha-Berisha clash / Former candidate for DP chairman reacts harshly: One is empty, the other consumed

Former US Ambassador Arvizu does not forget Albania, appears in photo with Socialist MP

Kreshnik Spahiu: If Basha had become prime minister, would anyone have gone to Berisha's Foltore?

Kurti visits Brussels today / The ministers who will accompany him. Recent developments are revealed