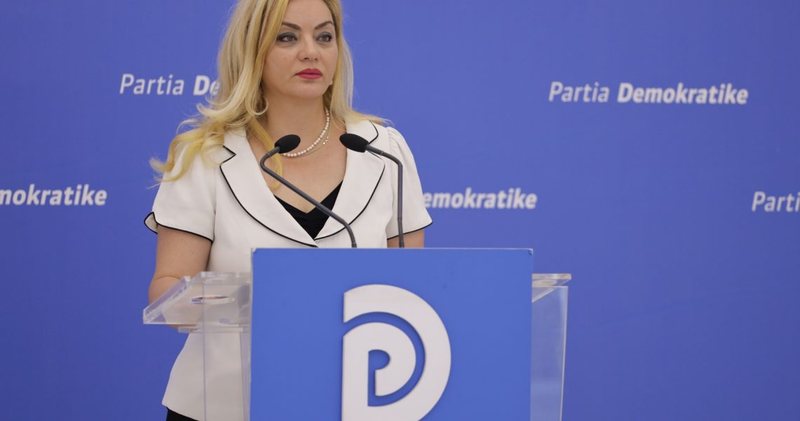 Democratic Party MP Albana Vokshi, spoke tonight on a TV show about the latest developments in the DP.

Regarding the process of electing the President, and today's statement made by Enkelejd Alibeajt, as he said that it is the obligation of the opposition not to boycott the process, Vokshi said that there was no meeting of the PD Parliamentary Group and that he has no tag to collect.

"There has been no meeting of the Parliamentary Group, it has not been called, because I know with some authority it still calls Alibeaj, but it is the leadership that must call the meeting, Alibeaj can speak on his behalf, he knows only himself, Balla and Rama. If he speaks on their behalf let him come out and speak, but he does not speak on my behalf, nor on behalf of the parliamentary group, we do not recognize him. It is clear! Today, yesterday, the day before yesterday, the parliamentary group did not convene, but even if it did, it does not decide on the political line of the Democratic Party and the presidential procedure requires the will of the political parties. It is the DP leadership forums that define the political line. "Alibeaj does not represent the democrats, the democrats on May 22 came out and voted for president Sali Berisha", she said.

Vokshi added that Alibeaj has become ridiculous and that the Democrats have already elected the chairman of the Democratic Party.

"If the resolution had been followed by Alibeaj, it would not have been ridiculous. Alibeaj in office? Did the Democrats vote? "The president was elected… Del speaks on behalf of Rama and Balla and Lulzim Basha, because Rama and Basha can continue to have an agreement that refers to the election of the President", declared Vokshi.

"It is a farce. Rama made fun of everyone, initially he made fun of his group, my colleagues told me… after they voted, what happened then? He put them in the ballot box with envelopes, what did he say the next day? I will not remove him from the Parliamentary Group. He made fun of the pseudo-opposition, to get his name out, we said no, as long as it is not clearly defined that it is the opposition that will nominate the candidate for president, we do not participate in the farce. We have authorized Luciano Boci and Oerd Bylykbashi to contact the opposition groups, there have been talks with other opposition parties which are clear that Rama does not intend to name the opposition candidate. We do not boycott but we will take our decision by vote ", said Vokshi.

Last chance on May 29, will the Re-establishment Group lead 20 firms to nominate a candidate for President?

"The Temporary Re-establishment Commission is mandated to appoint representatives to find a common position with the opposition parties, and if it is decided that the proposal comes from the opposition, definitely, not in vain name proposals to be ridiculed, no! The president must represent the unity of the Nation. "The decision in the resolution of the Democratic Party is that if the President is elected by the candidacies of the united opposition, we are participating", says Vokshi.

Rama expelled the journalist, there is a strong reaction from 6 international organizations: Refrain! Remove immediately...

Veliaj replies to Kryemadhi: You and Meta are immersed in affairs and corruption, the villa in Lalez is a symbol of greed, together with Berisha, your hands are stained with the blood of 'January 21'

"People near Basha were paid by the incinerators"/ Monika Kryemadhi clarifies her strong accusations and warns of the next move: There will be other evidence, the lawsuit will be drawn up these days!

The heads of the "Foltores" and LSI branches start cooperation, go down to the field to charge the militants for the July 7 protest, the distribution of money to the participants begins

Democrats located in two squares/ What scenario will there be tomorrow before the Prime Minister? Berisha tells the details: Huge protest. All options are possible. The agenda is cleared

The July 7 protest, Sali Berisha comes out with a strong warning for the State Police, he also has a message for Edi Rama: Tomorrow is the big day!

"The serious situation requires the unification of all energies", the General Secretary of LSI joins Berisha's table