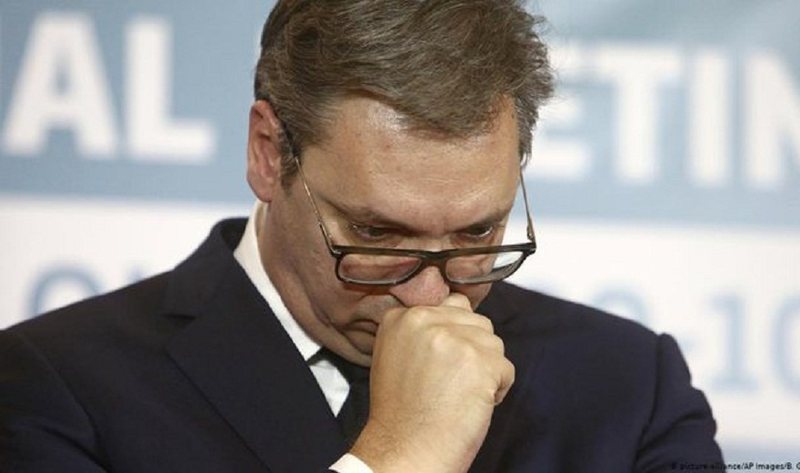 From New York, from the session of the General Assembly of the United Nations, the president of Serbia announced that in the next 72 hours, due to increasing pressure, he will reveal important information to the public. To make the drama even greater, it was announced that the president, due to different opinions and attitudes, both in the public and in the highest state leadership, will announce his plan on how and by what means continue Serbia. Serbian media write that no one, not even his closest collaborators, knows exactly what "terrible decisions" Vucic will announce. "Danas" sources suspect that it will be another performance for the public and that Vucic will announce that "after dramatic reflection, he will make another dramatic decision".

The Prime Minister of Serbia, Ana Brnabic, has said that her country is currently facing the biggest and most difficult pressures since 1999, especially after the United Nations General Assembly. During an interview, she assessed that the reactions to the signed consultative plan of the Ministry of Foreign Affairs of Serbia and Russia are only an excuse for the attacks on Serbia and emphasized that the plan has no legal force because, according to her, it was not approved by the Government of Serbia. "It is about the biggest and most severe pressures on Serbia so far, since 1999. She recalled that all those who "listened carefully to President Vu?i? in his speeches and conversations during July and August" know that he has clearly mentioned several times that in the second half of September the pressure on Serbia will be incredible. "That's what's happening now." Especially after his presentation at the UN General Assembly, where he gave a completely honest, open, extremely brave speech and told the absolute truth without excessive emotion and blew up in the face of all the great powers. The next day I told him that he will not be forgiven for this". She emphasized that the consultation plan with Russia is a technical issue and that it is a non-binding document that has been signed for 26 years. "If anyone had seen those who criticize and attack Serbia and announce statements against our country, they would have seen that, unlike similar plans, neither the aspect of security nor any kind of military cooperation is mentioned in this one. "This is in consultation with an important country that does not recognize Kosovo,

Croatian Minister: Recognition of Kosovo by Serbia is imminent

On the other hand, all this international pressure will have a finalization and that will be the recognition of Kosovo by Serbia. The Croatian Minister for Europe and Foreign Affairs, Gordan Grliq-Radman, in an interview, estimated that the coming months are crucial for reaching an agreement between Belgrade and Pristina, with the message that Serbia's recognition of Kosovo is inevitable. He added that the agreements reached in Brussels should be implemented, including the one for the Union of Serbian Municipalities, but, according to him, the ZSO should be in accordance with the constitution of Kosovo and "should not have powers that threaten the sovereignty and functionality of Kosovo" .

The alarm is raised in Podgorica, an explosive device is suspected in the Supreme Court building

Energy crisis, Kosovo gives good news to the citizens, here is what has been decided

The long-awaited decision is taken, the EU gives good news to Croatia

Russia instigates the conflict in the North of Kosovo, the most terrible "loyalists" of Vladimir Putin land in Serbia, the alarm is raised for war in the Balkans

Tensions rise in the North of Kosovo, powerful explosions for the opening of the CEC offices, the USA reacts: There are no conditions for holding elections

"Vucic is a man of Russia", the German daily "attacks" the Serbian president: he made the anti-European ally the head of the secret services

Tensions in the north, the EU's immediate reaction is coming, here is the demand for Kosovo

Fear and panic in high schools, bomb threats continue in the neighboring country

The incidents in the north of Kosovo, the Minister of the Interior Sveçla reacts harshly and discloses strong details: The perpetrators are former Serbian police officers, they were trying to...

What is happening? Tensions in the north of Kosovo, KFOR cars enter the yard of a garden in Mitrovica

Tensions in the north of Kosovo, the immediate decision by Gabriel Escobar is quickly revealed