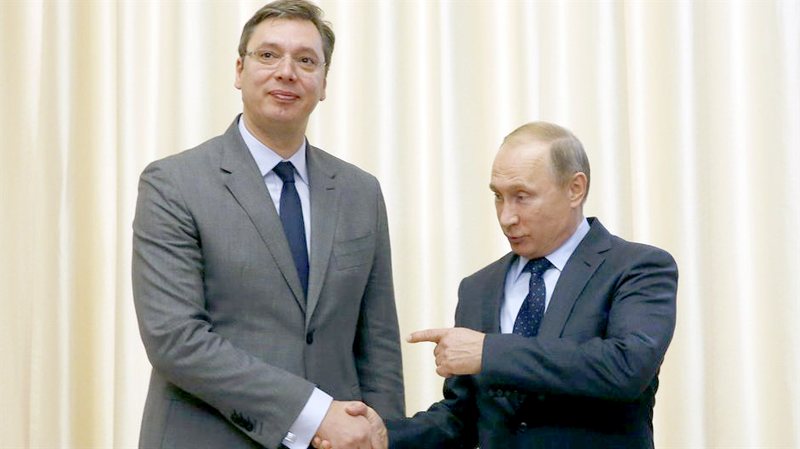 Recent developments reinforce the earlier thesis that the Balkans is a 'powder keg'. Serbian President Aleksandar Vu?i? is not only satisfied with disturbing the situation in Kosovo, but he is also looking towards Croatia. This is a recent warning from the Croatian media, where Vucic's plan to incite hatred of Serbs against Croats and ensure himself a few more years in power is broken down. "Vucic has a constant tendency to increase the intensity of Serbs' hatred towards Croats and that his speeches are filled with a strong nationalist note", writes the prestigious Croatian. "Serbian President Aleksandar Vu?i? is able to enter into military conflicts as an extended hand of Vladimir Putin, as well as to manipulate the measures to stay on the throne", adds this same media. "Aleksandër Vucic is not only a head of state who finds it difficult to manage in critical moments, so he manipulates, lies and avoids making difficult decisions. No, he is an extremely dangerous man with even more dangerous goals that go as far as staying on the throne, he is able to stage a (military) conflict through a carefully created atmosphere of "Serb vulnerability in Croatia ". Either in Kosovo, or in Montenegro, or in Bosnia and Herzegovina. And maybe, who knows, eventually in Germany, Turkey, Italy", warns Glas Istra. "There is no doubt that after every nationalist show of the Serbian president Aleksandër Vucic and his pathological-verbal orgy and masturbation over the Croats killed in the 90s, a section of the uninformed, ignorant and public self-criticism intensifies the intensity of hatred towards everything Croatian. We are witnessing that Vu?i?dita is daily increasing the army of his followers in that earthy but effective way, for whom the successful, normal and justly settled Croatia, at least unlike Serbia, is becoming a benchmark of disappointment. ", writes Robert Frank, editor-in-chief of Glas Istra, in his author text.

The key to Vucic's survival in power

Croatian media draw attention to the fact that the Serbian president's rhetoric alludes that Croatia is to blame for any "trouble" in Serbia, avoiding accepting responsibility for its own actions. "This is Serbia, the dominant one, for which Croats are to blame for every thing: from the high prices of electricity, oil, fruit and vegetables or white goods, to the fact that we beat them in the war that was much more serious. In all these contexts, Vu?i? distorts the truth and puts it in the communication code of the world liar, Baron Munchausen", writes Glas Istra. It is also added that the strengthening of such a narrative is the key to Vu?i?'s survival in power and winning voters. "If by chance it were not so, if, therefore, he would not escape the forgeries with which he pollutes his Serbs, Vu?i? would he regularly lost elections, which for years, on the contrary, he won easily. precisely because of hegemonic politics, and not because of the benevolence of the leader, who, on behalf of the people he leads, accepts the crimes of his country and his responsibility in all of this. With every day of his government, proportional to the production of crises and frauds, Vu?i?e puts this region in the anteroom of a new conflict", warns Glas Istra. The above-mentioned newspaper doubts that if the "war rhetoric" continues, the Balkans could become a territory where direct conflicts will occur again. "Everyone is only looking out for their own narrow interest. All this goes in favor of Vucic. Like an extended hand of Vladimir Putin, like RS Milorad Dodik, without many problems. Vu?i? is able to reshape the most dangerous phrase produced by the Putin administration and project the "denazification of Ukraine" into the "denazification of Croatia", Kosovo, Montenegro or Bosnia-Herzegovina", the Croatian media article states. This is another perspective that highlights the game being played by the Serbian-Russian axis.

Sensational decision! The US sanctions the senior official in the Balkans (Details)

"The earth is cracked up to 8.5 kilometers"/ The Greek seismologist makes a scary prediction: A powerful earthquake is expected very close to Albania

The car of the head of the Army in Kosovo is engulfed in flames, the general miraculously escapes

Sesel will testify in The Hague, the Serbian extremist under investigation for the release of confidential data