Dacic, Vulin and a number of other officials receive Russian anti-Covid vaccine, their statements come to light 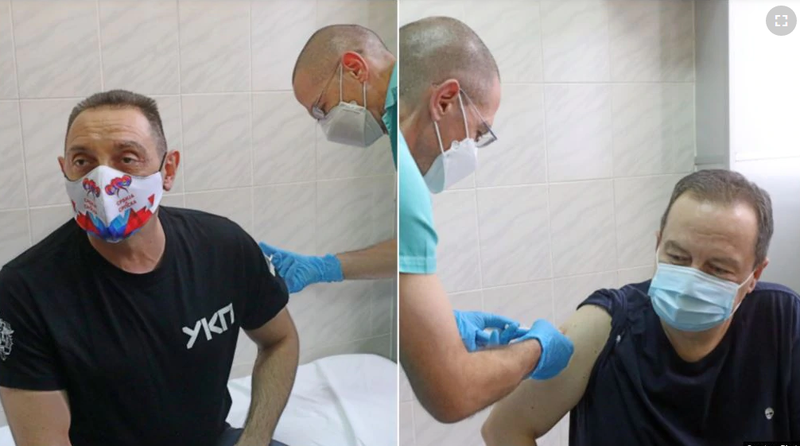 The Speaker of the Serbian Parliament, Ivica Dacic, and the Minister of Interior of Serbia, Aleksandar Vulin, received the Russian vaccine against coronavirus - Sputnik V - at the Torlak Institute of Virology in Belgrade, the Serbian Government announced.

The Russian vaccine was reportedly given to a number of other Serbian officials, including Marija Gnjatovic of the Nuclear Energy Institute, Dragana Despot, director of the Institute for Biocides and Medical Ecology, and Mirsad Gjerlek, state secretary at the Serbian Ministry of Health.

"We are all fine. We will take the second dose within three weeks, but I have no doubt we will be fine. We did not ask for the vaccine, but we responded to the request of the experts for the highest officials to show publicly that they are not afraid of the vaccines ", said the Speaker of the Assembly, Ivica Dacic.

He stated that this action has no political motives and added that it has been agreed that senior institutional leaders receive vaccines from different manufacturers in order to increase citizens' trust in vaccination against COVID 19.

"We will inform you if we are not well, but I do not believe that the Russian vaccine will 'hit' us," Dacic told reporters.

Serbia maintains close ties with Russia, but also with Western countries. Serbian Prime Minister Ana Bernabic has been immunized with the vaccine of Western companies, Pfizer and BioNtech.

Interior Minister Aleksandar Vullin stressed that vaccination against COVID-19 is free. "I believe that the vaccine is good and that everyone should get it. "I wanted to get a Russian vaccine because I believe in Russian medicine," Vulin said.

The first delivery of 2,400 doses of Sputnik V vaccine arrived in Serbia on December 30th.

The Serbian Agency for Drugs and Medical Devices (ALIMS) announced a day later that the import had been approved and that it had met the legal requirements for use.

Serbia and Belarus are the first countries on the European continent to be supplied with the vaccine. The Russian vaccine has not yet been approved by the European Medicines Agency (EMA) or the World Health Organization (WHO).

The US-German vaccine, Pfizer / Biontech, is the first to receive approval for use in Serbia, and immunization of the population officially began on December 24th.

As the Serbian government announced on January 6, by the end of this week, vaccination of 11,000 people is planned.REL