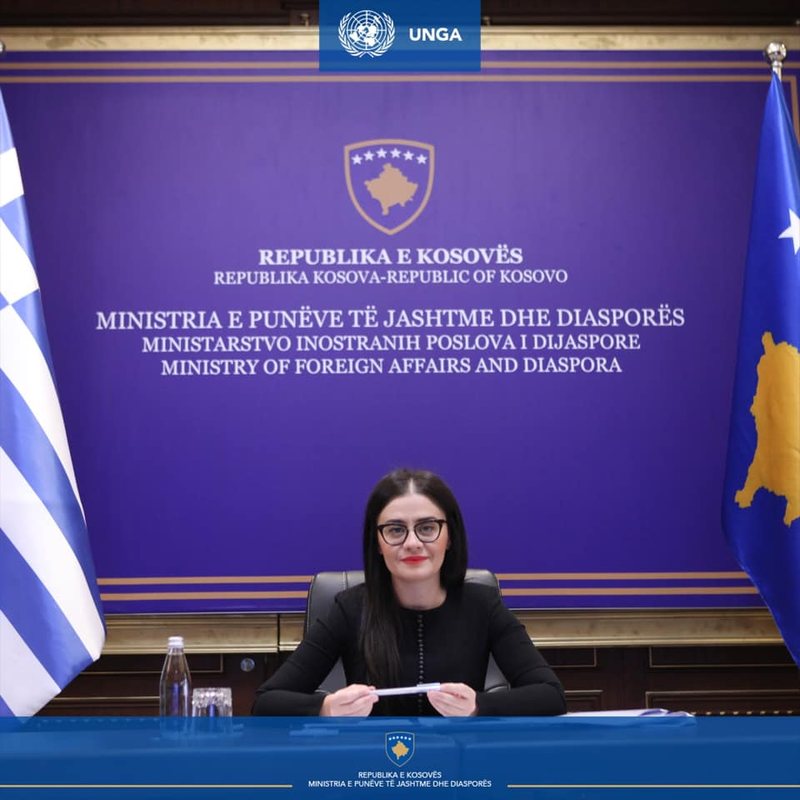 Kosovo's chief diplomat, Meliza Haradinaj-Stublla, took a step yesterday to react to Serbian Foreign Minister Ivica Dacic. The Serbian minister stated on Friday that Serbs are cooperating with Albanians and are showing the whereabouts of Kosovo Albanian bodies buried in mass graves on Serbian territory during the Kosovo-Serbia war. He even threatened these "collaborators". In this regard, the Minister has written a letter to the ambassadors of QUINT countries. In a Twitter post, the Kosovar chief diplomat made public the letter where she considered that Serbia is undermining the spirit of dialogue. "Although we are going through a challenging pandemic time, and all democratic governments are showing signs of greater mutual respect and solidarity, Serbia is undermining the spirit of dialogue. "Neighborhood relations and the processes of a possible reconciliation after the Washington agreement and the active dialogue in Brussels", she wrote. The letter further criticized the international silence on the case and made a brief recollection of the war crimes. "I feel compelled to express my deep disappointment at the total indifference of the international community in condemning the shameful language of the Serbian government against the victims of the recent war and their family members. Let me remind you that Kosovo is still awaiting justice for Serbia's genocidal actions against more than 13,000 Kosovo Albanians killed, including 18-month-old infants, more than 1,300 children, more than one million deportees from Kosovo, more than 400 massacres carried out systematically, more than 20,

She went on to explain that Dacic's threats had caused tremendous pain to the people of Kosovo and opened the old wound, and especially to the families of the victims and those still missing 21 years after the war. The letter also mentions the statement of the Serbian Minister of Defense, who said that Albanians can unite and take the territories of other people, while Serbs can not unite even on their own land and that there is a risk of creating Albania. of the Great. "Only united Serbs can stop 'Greater Albania' and the sooner we unite institutionally, the sooner the time of peace in the Balkans will begin," said the Serbian minister, stressing that this time too the EU will remain silent. to this statement and will not take any action. In a letter to QUINT countries, the Kosovar chief diplomat said that such statements by Serbian officials deserve a strong punishment, as according to her they are shameful and chauvinistic acts. Haradinaj-Stublla also focused on the Special Court and the recent situation in Kosovo. "The aggressor and the victim will be able to have equal treatment only when justice is done for all the atrocities and crimes of the past. Without this premise, asymmetric treatment is unfortunately, always favorable to the aggressor. "I strongly condemn the extremely offensive language of the Serbian government, relying on the strong foundation of peace and security that you have provided for us in Kosovo, but also in Serbia," she concluded. The Ambassador of Kosovo to the United States of America, Vlora Çitaku, and the Office for Kosovo in the Serbian government, through Marko uriuriç, also reacted to the minister's letter. Citaku said that Dacic publicly threatened Serbs who want to tell about the mass graves of Albanians, then Vulin offends Albanians in official communiqués and the international community is silent. While Djuric, through a post on Twitter said that for the first time he agrees with Vlora Citaku, but the silence of the international community is deafening for Serbs. "For the first time we agree, the international community's silence is truly deafening - 20 years without justice for the thousands of Serbs killed and ethnically cleansed from Kosovo, hundreds of burned Christian churches and stolen youth," he wrote.