Hoti responds to Lajçak's statements: You know our principles for dialogue, we will not accept violation of the territory 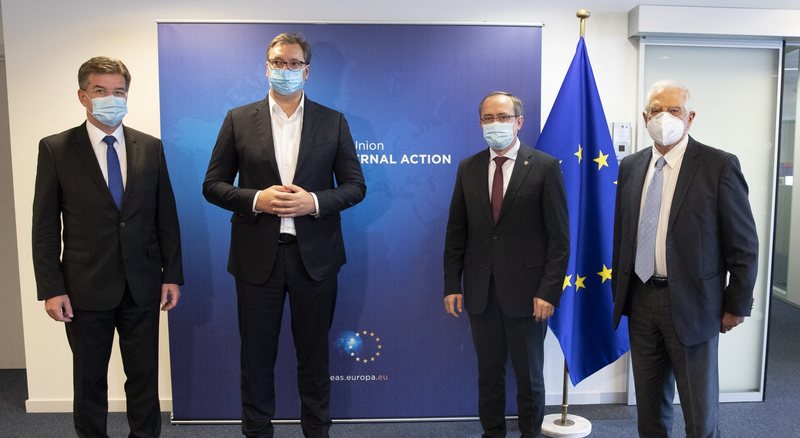 After numerous reactions from Kosovo politics regarding the statement of the European Union special envoy for the dialogue between Kosovo and Serbia, Miroslav Lajcak, that Kosovo should make changes to the Constitution to put the Association of Serbian Municipalities into operation, finally has There was also a reaction from the Prime Minister of Kosovo, Avdullah Hoti. The Prime Minister stated that the state of Kosovo has set its principles referring to dialogue. He further expressed his conviction and assured the citizens that the territorial integrity and the unitary character of Kosovo will not be affected. Not wanting to indicate whether constitutional changes will be made or not, the head of the Kosovar government said that the agreement should be comprehensive and binding that addresses all issues between the two countries with the first point towards mutual recognition. "You know the principles we have set for the dialogue process that do not discuss the issue of exchange of territories and this has been removed from the negotiating table, the second principle is that the unitary character of Kosovo is not affected and the agreement should be comprehensive and binding. addresses all issues between the two countries with the first point towards mutual recognition. We are in the process of dialogue and I am satisfied with the progress that has been made so far, the principles we are holding which are being respected by our international partners and the mediator of the dialogue ", said Hoti. Further, Prime Minister Hoti also stated regarding the Washington agreement and specifically about the point that refers to Lake Ujman and the feasibility studies that will be done on this lake. "A team of experts from the American department is in Kosovo, in Pristina are studying all the modalities needed to conduct this feasibility study," Hoti explained. Regarding the unitary character of Kosovo, the Speaker of Parliament Vjosa Osmani also spoke. In a meeting with the new Belgian ambassador to Kosovo, Frederic Meurice, Osmani said that Kosovo and Serbia can reach a final agreement only when justice precedes peace and reconciliation. President Osmani reiterated the position that the constitutional order of Kosovo and the unitary character are inviolable and that Kosovo should be acquainted with its current borders. Osmani said that the good relations between Kosovo and Belgium date back to the time of President Rugova, before the declaration of independence of the country.

Kosovo with concrete steps for the implementation of the agreement

The Prime Minister of Kosovo, Avdullah Hoti, in a consultative meeting yesterday with the Minister of Foreign Affairs, Meliza Haradinaj Stublla, as defined by the Constitution of the Republic of Kosovo, gave his consent to send to the President the request for opening the mission diplomatic in Israel. "The Prime Minister stressed that Israel is a strategic partner of Kosovo and that the establishment of diplomatic relations between the two countries comes as a result of the September 4 agreement in the White House," the press release reads. Israel has recognized Kosovo as an independent state, as part of a US-mediated agreement between Kosovo and Serbia in the White House on September 4th.

Ines Demiri has been appointed by the state of Kosovo to serve in Israel. “I am honored to have been appointed Charge d'Affaires of the Republic of Kosovo in Israel! I look forward to this great challenge, which means my great passion to further deepen the relations between Kosovo and Israel ", Demiri wrote earlier.