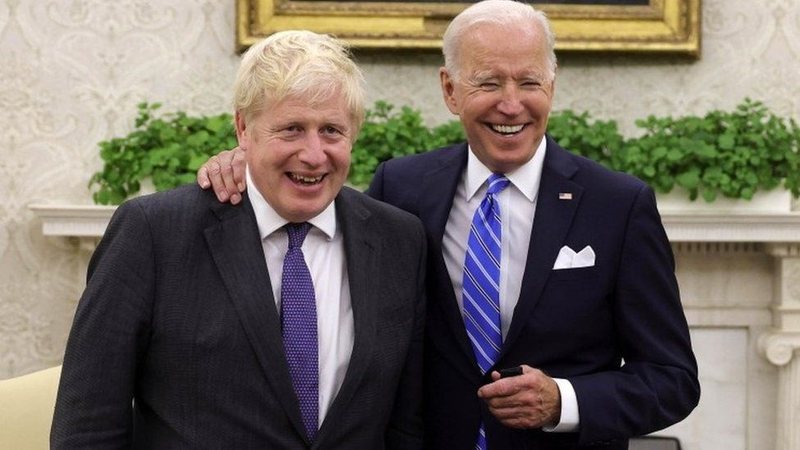 A sensational plan comes from London. With the American "blessing", Prime Minister Boris Johnson is planning to build a new system of alternative political, economic and military alliances to the European Union that brings together countries united by distrust of Brussels. This British plan also directly affects the Western Balkans. It is clear that the enlargement of the European Union is not going anywhere, certainly not for the Western Balkans and one of the reasons for this is President Emmanuel Macron. The French leader, referring to Ukraine's request for swift EU membership, said it could take decades for that to happen. He has spoken out against speeding up the procedure for Ukraine, but also for other states, arguing that the standards should be respected. Instead of accelerating, he proposed what he called a "European political community" that could be open to non-EU countries, such as the United Kingdom, which has left the bloc. Also what puts the "seal" is that June remains the deadline for the opening of negotiations with Tirana and Skopje and the Macedonian president said yesterday that the chances are very slim for a date within the next month, taking into account the position instead of Bulgaria's number one veto lift.

Details from the London project

Prime Minister Boris Johnson "first presented his idea to Volodymyr Zelensky when the Ukrainian president received him in Kiev on April 9." Bid recipients? The Western Balkans, Ukraine, of course, but also Estonia, Latvia and Lithuania, NATO's Baltic strongholds. And, despite differing views on his government's economic policy, fundamental Poland, which sees Russia as its number one enemy. A true European Commonwealth created "to kill more birds with one stone". First, to project UK influence in the heart of Eastern Europe, second, to strengthen London vis-imit-vis the European Union by creating a complementary mechanism and a fifth column of member states that can avoid any to reunite with Russia. The third key point is the desire to win over Kiev to the Western cause by breaking the European impasse. Zelensky is waiting for the next European Council, but hopes for a quick accession to the EU for Kiev are fading, as there are many problems to be solved, despite the war.

Implementation of the project by Britain in the Western Balkans begins

British Foreign Secretary Liz Truss said that the United Kingdom is committed to helping ensure peace and stability in the Western Balkans. The UK is expected to mobilize $ 100 million in investments in the region by 2025 through the British International Investment Partnership agenda. Truss, while on a tour of Europe, has warned that Russian intervention in the Western Balkans could risk leading the region to war. The secretary said that "we all need to learn from the mistakes of the past" to confront President Putin.

No signal from Bulgaria for negotiations

Bulgaria has given no signal to change its stance on Skopje to lift its veto on opening northern Macedonia in order to join the European Union. The country's president, Stevo Pendarovski, sees no significant change in Bulgaria's behavior and believes the chances of unlocking the veto by the end of June are slim. "Despite all the developments on the European continent with the Russian aggression in Ukraine and all the geopolitical motives that call into question the concept of a united Europe, the Bulgarian position is still difficult and there are no significant changes. I will assess our chances. "to start negotiations, finally after 17 years in which we are a candidate, at less than 50%," Pendarovski said.