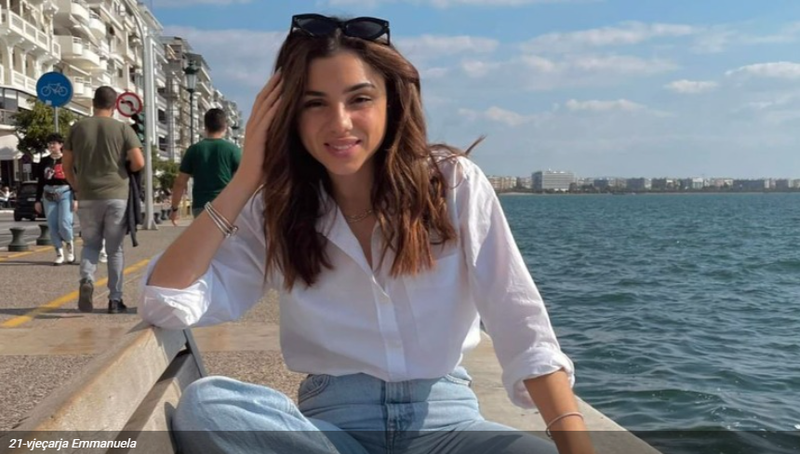 With sorrow and pain, relatives and friends said their last goodbye to Emmanuela, in Chania, Crete, still not believing her premature departure from life and within a few minutes in a serious accident that happened on November 23, where the Greek student was hit by a car by the 26-year-old Albanian, who, after dragging her with his vehicle, left the scene, leaving the girl in the middle of the road and in serious condition.

A few hours after the girl's funeral, the girl's mother made a very touching post on Facebook.

"Have a good trip my Emma to the edge of the universe, may your tears cool you wherever you find my pain...", wrote the mother of the 21-year-old, who decided to donate her daughter's organs.

"Rest in peace my beautiful soul... rest and don't worry about a thing... I will love you as long as I live and breathe," she says, closing her post with two broken hearts.

How did the serious event happen?

The 21-year-old Greek student was seriously injured in the early hours of Tuesday, when she was dragged along Egnatia street, at the height of Kamara, by the car driven by the 26-year-old Albanian, who left the scene and left her new in bad condition on asphalt. From the first moment, the doctors tried to keep her alive, but her health condition was extremely critical and she was admitted to the Intensive Care Unit, but unfortunately she did not make it.

A few hours were enough for the young man to hand himself over to the police with a sign of repentance, where he also asked to communicate with her parents. Making excuses, the young man stated that he left the scene because he lived in Greece without papers. A criminal proceeding has been initiated against him, as well as against the 19-year-old passenger.

In his testimony, he said that he was devastated by this event and if the victim had not tried to cross the 'Egnatia' road (where she died), nothing would have happened, it was enough for the young woman to cross the white lines .

According to the prosecutor's prosecution, the 26-year-old is accused of dangerous driving resulting in serious bodily injury (criminal offense), as well as driving without a license (misdemeanor). The 19-year-old woman (housewife) faces the criminal offense of assisting in the driving of a dangerous vehicle resulting in serious bodily injury and assisting in a traffic accident (misdemeanor).