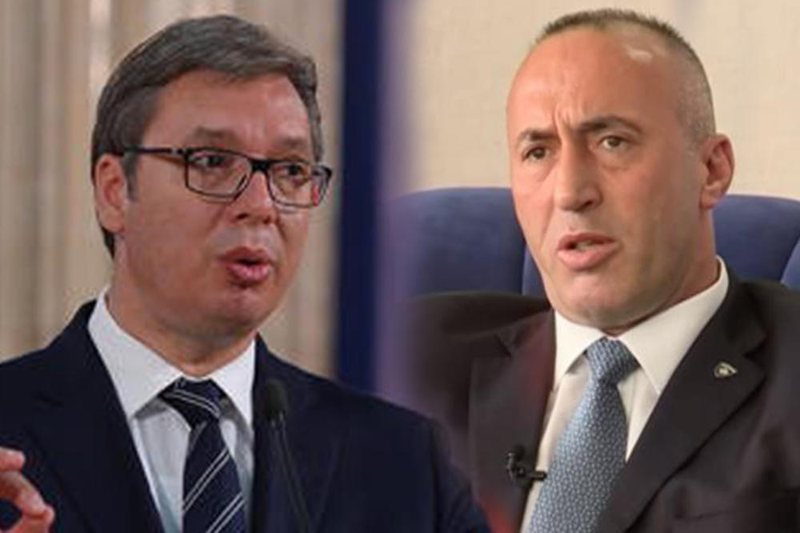 Yesterday, in addition to the developments related to the early parliamentary elections, was characterized by an exchange of remarks between the leader of the Alliance for the Future of Kosovo, Ramush Haradinaj, and Serbian President Aleksandar Vucic. In a presentation of his AAK party program, Haradinaj also spoke about what awaits Kosovo in the coming years and predicted that a referendum could be held to join Albania in case the Kosovar state does not recognize progress in the international arena. "What happens after four or five years if there is no progress in Kosovo, and you have to understand exactly why I am asking this question. If Kosovo is not at the doors of NATO, and if Kosovo does not have visa liberalization from the EU, there is no recognition from the EU five and they drag us as they have kept us so far, what if we are not at the doors of the UN? We will not accept to remain in a frozen conflict nor will we accept to be divided, but we will hold a referendum for unification with Albania, keep this in mind ", said Haradinaj. For what he expects to happen, the AAK leader has blamed the EU and international partners who have not done what is necessary to facilitate Kosovo's European path. "Not that we want, but for 20 years we have given the word to the West that we want to respect a common vision for a Euro-Atlantic Kosovo, to join the EU, to go to NATO, to become a member of the UN , to recognize Serbia, and with the desire for the EU to convince the five countries that have not yet recognized us. Why do they keep us so isolated, why do they leave us waiting, and from time to time they tell us that you have this guilt and that guilt. Was Serbia and other neighboring countries not to blame? "We can not procrastinate until someone is in the mood for the Kosovo issue to be completed," he warned.

The President of Serbia, Aleksandar Vuçi., Said that the statement of the candidate for President of Kosovo, Ramush Haradinaj for a possible union with Albania, is a threat not only to Serbia, but to the entire region, Europe and even the whole world. "But he should not return with a threat. "You are doing what you want, and we will have a good and adequate response and the citizens should not worry," Vucic said at the Palace of Serbia. The Serbian head of state continued with the request for a reaction from the United States or the European Union regarding Haradinaj's statement. This is an attempt to be victimized in the eyes of the world, despite the fact that it is the Serbian politicians and even Vuçi vetë himself who from time to time declare strongly against Kosovo. "I wish I had heard more reactions from Washington and Brussels and other centers of power in the world, because God forbid that someone from Serbia would make a statement like this, they would almost bomb us. "But it is useless to talk more about double standards," Vucic added. The Serbian president further spoke about the scenario, where Haradinaj manages to take the post of President of Kosovo and Albin Kurti to have the chair of the Prime Minister. Vucic said that a very unfavorable situation could be created, in which both the Government and the President of Kosovo will strive for unification with Albania. "We will be able to react to this. "I am not threatening anyone, but the creation of a Greater Albania is a threat to Serbia and the region and to Europe and the world," he said. On the other hand, Haradinaj responded to Vuçiç by expressing himself through a post on Facebook. "Do not be afraid, Mr. Vucic. You do not need to be nervous. Kosovo is just looking for what belongs to it. "If you and others want to avoid a referendum on the unification of Kosovo with Albania in 2025, there is a very simple way: Serbia to recognize Kosovo as an independent state," Haradinaj wrote, concluding that as long as Vucic considers it dangerous, which means that it is on the right path for the good of Kosovo.