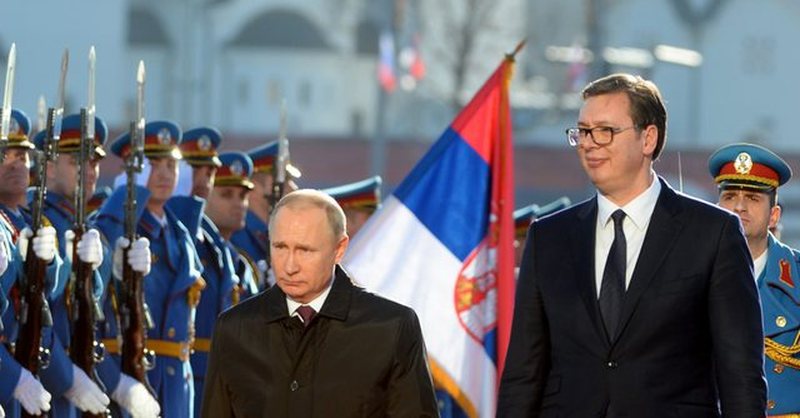 As Western economic sanctions hurt Russia's economy, the Kremlin and its supporters are seeking "every corner" to find jurisdiction to circumvent sanctions. Moscow seems to have its eyes on the Western Balkans, long "stifled" by corruption and strong Russian influence. With a Serbia so openly cooperating politically and economically with the Russian aggressor, the Open Balkans risks becoming Putin's Trojan horse in the Western Balkans. Signs of a strong alliance with Russia have been further strengthened by Serbian President Aleksandar Vucic. He has announced that he will have a phone call on Wednesday or Thursday with his Russian counterpart Vladimir Putin. Vucic announced a new agreement on Russian gas supplies to Serbia. "Quantity is the most important thing for us, price is the number two aspect, and the number three aspect is the security of supplies, with which we have not had any problems so far. "The first two aspects are crucial," he said. Serbian President and Hungarian Prime Minister Viktor Orban also opened the 89th International Agriculture Fair in Novi Sad. Vucic said friendship with Hungary is essential for Serbia, adding that both countries should not worry about food supplies. Vucic also said he had reached an agreement with Orban that would allow Serbia to deposit 300-500m cubic meters of natural gas in Hungary. All this full cooperation of Serbia with Russia, represents the best opportunity for Putin to build and effectively use the economic leverage in the region, with the Open Balkans, after the project created by Vucic together with Albania and Northern Macedonia in year 2021, aims to promote links between the three countries to eventually create a single market for goods, services and capital. The Open Balkans could enable Russia to take advantage of its greatest advantage over the Western Balkans, that of economic influence.

Aleksandar Vucic used the Open Balkans as an opportunity to escape crises by exporting wheat. After Belgrade blocked it for several days, Vucic said that in the end "Open Balkans" escaped the flour crisis. Exploiting corruption in the Western Balkans is essential to the Kremlin's efforts to cultivate influence in the region. This problem started decades ago. As the states of the former Yugoslavia liberalized their economies after the 1990s, rampant corruption exposed openings to Russian influence. Under Vladimir Putin, Moscow has used corrupt actors to exploit economic, ethnic and religious rifts in Balkan societies in order to use that instability to challenge the West. Western secession has complicated the problem, allowing Russia and China to fill the gap through corruption and investment in the "debt trap" in critical areas such as energy, oil, gas and security. This lack of attention could eventually weaken the impact of Western sanctions against Russia. Serbia and Bosnia and Herzegovina, where Russian influence is particularly strong, have refused to sanction Russia. Serbian media reported in early April that nearly 300 Russian people, including many in the IT sector, had opened companies in Serbia since Moscow invaded Ukraine on February 24, likely reflecting an attempt to circumvent Western sanctions by re-registering Russian firms. In Serbia. And although Albania, Montenegro, and others have developed Russian sanctions regimes in line with EU sanctions,