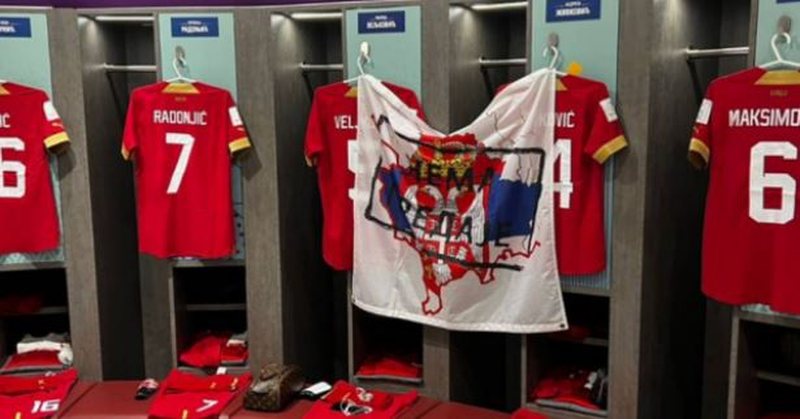 The Minister of Foreign Affairs of Serbia, Ivica Dacic, said on Sunday that Serbia as a country cannot react to the fact that the International Football Federation (FIFA) has initiated a procedure against the Serbian national team because they are a sports organization, but he has assessed this action as hypocritical, Beta broadcasts in Serbia.

FIFA has launched proceedings against Serbia's Football Association after a flag showing Kosovo as part of Serbia was hung in the dressing room before Serbia's World Cup match with Brazil.

Serbia played against Brazil on November 24 and lost 0-2.

A photo of the flag with the message "No surrender" in Serbian went viral on social media when it was shared by Kosovo's Minister of Culture, Youth and Sports, Hajrulla Çeku.

?eku described the image as an action by the representative of Serbia to use the World Cup to promote "messages of hatred, xenophobia and genocide".

"We expect concrete actions from FIFA considering that the Football Federation of Kosovo (FFK) is a full member of FIFA and UEFA," he wrote.

On the other hand, the Foreign Minister of Serbia, Dacic, referring to the initiation of disciplinary procedures against the representative of Serbia, said that there is nothing offensive if someone says "There is no surrender".

"Serbia is an internationally recognized country, a member of the United Nations, with Kosovo part of Serbia, what is not in accordance with international law and what is offensive. This is an indication of how there are no principles, but double standards. "They never punished Ukraine when it said that 'Donbass is ours' and 'Crimea is ours', what is the difference," Dacic asked.

The International Football Federation (FIFA) has announced on November 26 that it has initiated disciplinary measures against the Serbian Football Federation for hanging a flag with political content in relation to Kosovo in the dressing room before playing Thursday against Brazil in the World Cup in Qatar.

FIFA cited a section of its disciplinary code that covers misconduct, including "offensive gestures, signs or language" and "using a sporting event for demonstrations of an unsporting nature".

FIFA did not give a time frame for when the decision will be made, although Serbia will play on Monday, November 28 against Cameroon.

With 100 kg of cocaine in his suitcase, the famous football player is arrested. The details are highlighted

Touching interview published! The disease that defeated the football legend today: I'm afraid to die, I hope my story helps others

The world football legend passed away prematurely/ Get to know the profile of one of the strongest Italian strikers in history, from the title with Sampdoria to the Champions Cup with Juventus

'Enraged' Messi in the quarter-finals of the World Cup, the Spanish referee shocks with his drastic decision

It happens for the first time! Parting from Pele's life, NASA honors the legendary footballer in the most special and unusual way. Images go viral

A big loss! "The day we never wanted to come"/ The head of FIFA touching message on the death of the football legend

"Only a few months ago it appeared..."/ 9 years since the tragic accident in the Alps, here is the information given about the health of Michael Schumacher

What was not known? The mysteries of the legend Pele are revealed: the secrets of his career and the closet closed for 48 years

He is shot with a knife in the night bar, the famous football player dies, his girlfriend has a touching message: Please come home, I love you forever!