Drinking carrot juice every day for 8 months, doctors are surprised by what happened to this woman 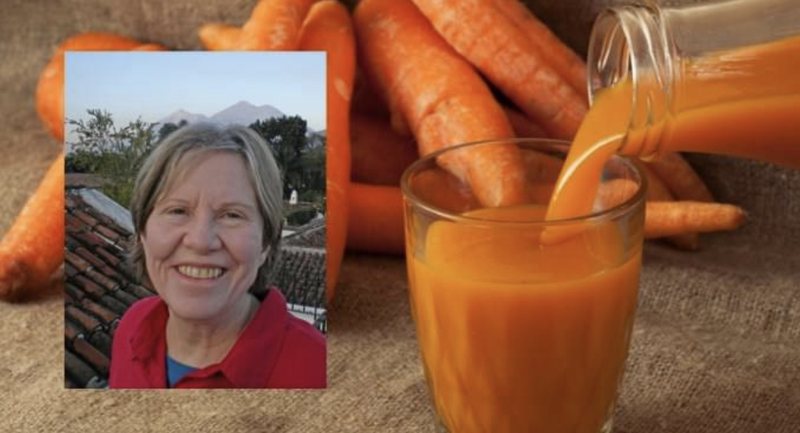 Ann Cameron has an interesting story. In 2012, Cameron underwent surgery for colon cancer, which was in its third stage. After her husband lost the battle with lung cancer, she refused chemotherapy.

She told her story on the blog chrisbeatscancer.com, where people who survive cancer tell their stories. In this blog, she wrote: “In June 2012, I was diagnosed with bowel cancer and after learning of this, I refused chemotherapy. "Every day I started to feel better, but after six months, the tests showed that the cancer had spread to the lungs and that the colon cancer had entered the fourth stage," Cameron said.

Thus, seeing that the treatments were showing no result, she began to look for alternative methods to heal herself. She found the story of a man named Raplh Cole. When Cole was 26, he was diagnosed with skin cancer. According to Cole, he healed himself by drinking 2.5kg of carrot juice every day. Cameron decided to try this method and started drinking carrot juice in various doses throughout the day.

Do you have cars when you travel? You have the solution at home, here's what to use

From digestion to beauty, here is the oil that does everything

If you drank milk this morning, you made a mistake, here is what causes it

Be careful, as you seriously endanger your health! Staying for hours without eating, here are three things you should not do on an empty stomach!

Avoid as much as possible, this food is damaging our kidneys day by day without realizing it

These are the reasons why you should not wear the same pajamas for 2 days in a row, when you read the reasons you will realize that you did a lot wrong, experts call it alarming

Do you suspect you are infected? This sequence of COVID-19 symptoms that differs from the flu

7 hallmarks that indicate you have passed the coronavirus

Situation from COVID, experts tell the secret how to take vitamins to be more effective

It's incredibly simple, how to thoroughly cleanse the lungs at home