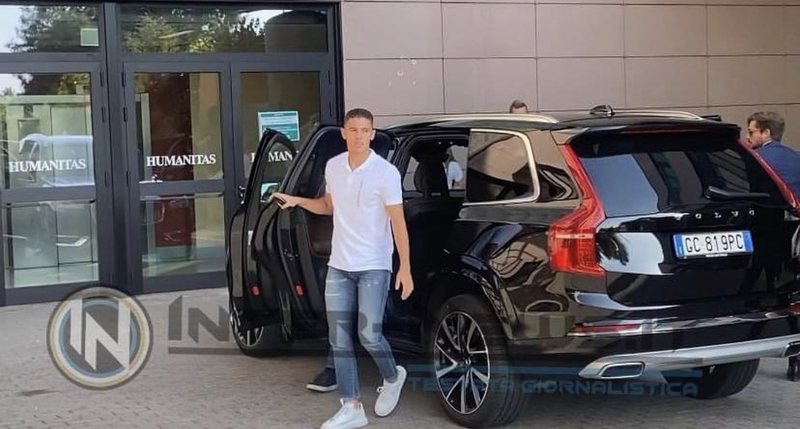 Albanians finally "catch" Inter. It is Kristjan Asllani who officially becomes part of the Zika, and regardless of whether he secures the formation or not, he seems to be a choice that can bring surprises to the Zika blue team of Milan. The Italian media also admit, when they write that it is not only Lukaku, but also Kristjan Asllani, the Albanian midfielder who was the first to arrive this morning at the Humanitas medical center, to perform physical tests. After the tests, the Albanian midfielder left the medical center, to go to the offices of the great Milanese club, where he will continue with the signature on the contract and most likely, the official presentation. Kristjan Asllani stood out with Empoli in the second half of last season and Inter paid 14 million euros for his card, as well as striker Satriano on loan, while the midfielder himself is expected to sign for 5 seasons, with a salary of 1.2 million euros per year. It remains to be seen whether or not Asllani will be the first preference for coach Simeone, but rivalry at a big club could penalize him.

Inter, in love with Albanians, also catches the eye of Kumbulla

Asllani may not be the only Albanian wanted by Inter, as the Italian media allude to another player of the Red and Black National Team who is targeted by the black and white club. In fact, it is admitted that Inter is fascinated by Albanian footballers. According to what the Italian sports daily "TuttoSport" reports, apart from Kristjan Asllani who today has undergone medical visits with the Zika, the leaders of Inter are looking at the defender of the Albanian National Team, Marash Kumbulla. In case of a possible departure of Milan Skriniari, the black club has a list of players and one of them is that of the Roma defender. The 22-year-old last season with the yellow-reds from the capital was activated in total in Serie A has collected 17 games as he has not scored any and has never assisted.

English media write that Chelsea has launched an attack to secure the services of the Brazilian striker of Leeds, Rafinja. The London Blues have made an official offer for the player who has long been wanted by Barcelona. About 55 million pounds is the amount offered by the Londoners, who do not seem to make room for the red and black "star", Armando Broja, who has just returned from a loan move to Southampton. The Hammers, in fact, asked for him last summer, but Chelsea preferred to loan him to the Saints. According to "Sky Sports", Broja is on the list of objectives of coach David Mojes, where the priority is to buy a striker who provides a certain goal quota. It is learned that Chelsea has asked Hem 25 million for West Ham for Broja and is already waiting for an official offer from "Hummers", which will be formulated very soon.

Bayern and Dortmund are confirmed as the main rivals for the championship title in Germany, the other teams have no chance

Balkan overthrows Skopje, the champion of Kosovo is one step away from the group stage of the Conference League

United attack for Aubameyang and Casemiro, but the club can also be sold

After 3 games in the Championship Manaj scored a goal, Hysaj has problems with Sarri