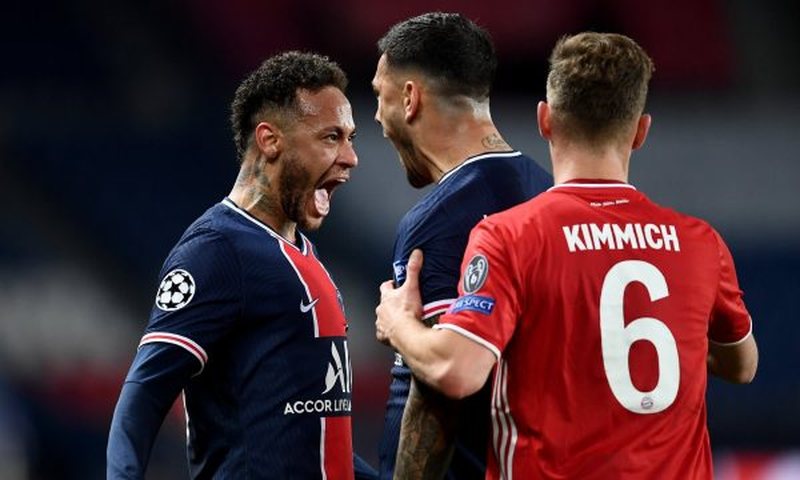 The Champions League gave special emotions last night, where Bayern Munich gave a spectacle against Paris San Germain, won 1-0, but one goal was not enough, so in the next round the French passed thanks to more goals in the opposing field. Thus, PSG came to this duel of the quarterfinal return to the advantage of the first victory, 3-2. The Germans had no choice but to attack, as they had nothing to lose. For this reason a spectacular match was expected and last night's level of play suited the two best teams of the moment in Europe. In fact, in the first 10 minutes of the match the teams played withdrawn, with a single chance from PSG, but then Bayern would start their dancing on the field, making a tactically disciplined game and choosing to play as a "wedge" forward with Çupo-Moting. Step by step the Bavarians increased the attacking game and created many scoring chances, putting the French team in difficulty. Neymar and Mbape were well isolated in the first fraction of the game and PSG lost ground in ball control. Holding the ball more Bayern dictated its rhythm and in the 41st minute hit through Çupo-Moting, realizing the goal of the lead that gave it a significant advantage over the Parisians. As for PSG, the best on the field was undoubtedly Neymar, who hit the post twice in this match, but luck was not with him. In the second half, Bayern maintained a high level of play, trying to find the second goal by all means, but encountered a careful defense of the French, who, seeing the euphoria of the Germans, became a "fence" at the borders. of the area, properly covering the spaces. The game takes spectacular views in the middle of the second half, mainly with Bayern attacking furiously, but also with the emotions of PSG counterattack. The last minutes were really dramatic, as both teams had scoring chances, but the finalization was missing. In the end, Bayern won the match 1-0, but in the semifinals of the Champions League, Paris San Germain went, thanks to the 3-2 victory in the first match, so for more goals in the opposing field. Meanwhile, the next quarterfinal match played last night, was the one between Chelsea and Porto. The English had won the first game with figures 2-0 and had the right composure to administer the lead. Their task last night was to maintain the lead of the first match and for this they had taken measures to isolate the opposing attackers. In the first half the Portuguese played better and created more chances in attack, but this was expected of them as they came from the first defeat. However, Chelsea defended well and efficiently for the result. In the second half, the English left the initiative to Porto and the latter found the goal, but then it was too late. Mehdi Taremi scored in the last seconds of the match, an honorable goal, an honorable victory for the Portuguese, but in the semifinals Chelsea passes, thanks to the 2-0 victory in the first meeting.