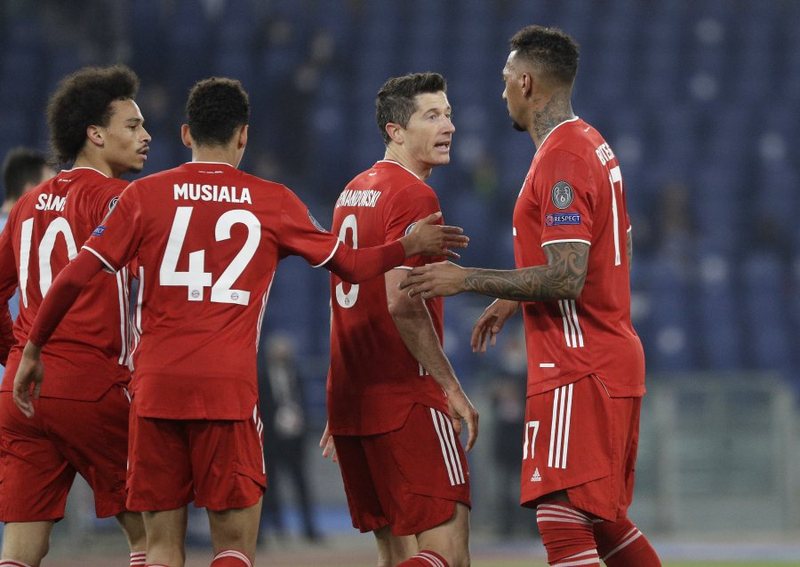 The Champions League came back last night with the next emotions, with two very high level meetings, which did not disappoint the viewers at all. Lazio faced the reigning European champions, the Germans of Bayern Munich, in the first duel between them in this 1/8 stage of the final. The Bavarians quickly found the net, in the 9th minute, through the permanent Robert Levandovski. Bayern's dominance on the field is evident, as the Germans have more quality and experience for matches of this level, therefore they are more comfortable in interpreting the game. In the 24th minute, an assist by Goretzka made Musiala score the second goal, making Lazio completely off the rails. Efficient management of the game and control of the ball brought the other case with a goal, in the 42nd minute, when Leroi Sane scored the third goal, causing Bayern to seal the victory in the first part of the meeting. With the start of the second half Lazio makes a mistake in defense and in an attempt to avoid danger, Acerbi takes the ball into his own net. 0-4 in favor of the Germans and everything seemed closed. But Lazio managed to quickly find the goal of honor, as Jakin Korrea narrowed the gap with his goal after assisting Luis Alberto. With the passing of the minutes Lazio, having nothing to lose multiplied its attacking forces and created many chances, balancing the game. Bayern took care to defend more and manage the goal advantage they secured in the first half. But despite the efforts, Lazio failed to score and Bayern won 4-1, being one foot in the quarterfinals. Meanwhile, Atletico Madrid hosted Chelsea last night, in the first duel between them at this stage of the UEFA Champions League. The English were absolutely dominant in the first half, evidenced not only by holding the ball at 64%, but also by kicks towards the square and chances for goal. However, despite dominating the game statistics, Chelsea failed to score at the gate of Atletico, which was properly defended during the first fraction of the game. In the second half, the speed in the technical-tactical actions and the physical superiority of the English team brought a significant dominance of the game in the offensive phase and this pace of dominance was rewarded in the 71st minute, after Oliver Zhirud realized after a cross in area one super goal with roveshata. At first the goal was canceled for offside position, but VAR confirmed as a regular position that of the French striker. Atletico tried to fix something in its game, but did not have the right freshness, this and the fact that the team of coach Diego Simeone has spent a lot of energy in the Spanish championship, where they hold the first place in the rankings. It must be said that Chelsea maintained a high pace of play in midfield and attack, which was also seen from the statistics of the game, where the dominance in building actions and shots on goal went in favor of the English.