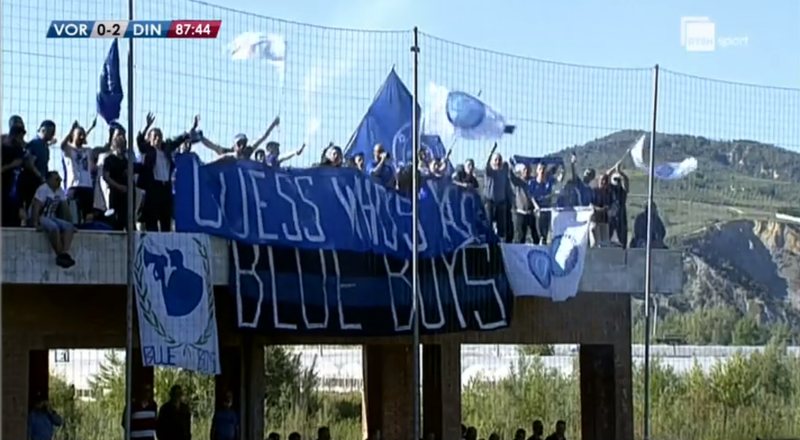 One of the biggest names in our football, Dinamo, managed to successfully take this edition to the first place in its group in the First Category and consequently to mathematically secure the ascent to the football elite, ie in the Superior Category. Dinamo had 9 years in the inferior categories and had lost a lot in this period. Driven from her complex, with no terrain and nothing of the sort, she still managed to preserve her name and thanks to an investment this edition managed to return to the elite. Now, in the new season, the rivalry of many contending clubs will be added to the "blue submarine", a team that has written its name in the quality of national football. Climbing Dinamo into the elite is a reward for athletes and staff, but also nostalgia for the older Dinamo players, who have a history of their own associated with this club.

After 9 years, there is a celebration for Dinamo. The capital Blues officially returned to the Superior Category after a long absence thanks to the 0-2 triumph in the transfer to Vora. 3 gold points that a week before the end deepened to 6 points the difference from the second place Burrel a week before the end of group A of the First Category. Against Vora, Dinamo was forgiven by the double goal of the Cameroonian striker Djidjëa who scored twice for the team of Olsi Ukut who climbed to the quota of 47 points. A victory against Vora was enough for Dinamo to officially reach the Superior Category, but even if they did not win the Blues, even with a draw they would return to the elite after the challenge between the two Dinamo followers in the ranking, that between Korab and Burrel ended in a 1-1 draw. . Dinamo thus joins Egnatia who also secured the climb to Superiore two weeks ago.

Uku: Climbing after 9 years, it's time to celebrate

Dinamo coach, Olsi Uku, said after the match that he felt excited and that for Dinamo it is time to celebrate. "I give the team a maximum grade and I thank everyone because they made an incredible championship and the hard work was rewarded. It is time to celebrate, I said that in the moment that mathematics does not allow us we will not celebrate, but today we all have the right to celebrate because it was a long period of suffering for us and Dinamo will go where it has place, had to be in the Super League. "When I took over the team, it was a great sense of responsibility, but I thank President Pontreli for this project launched in the summer and it is a great merit of him and all other donors for this great achievement", stressed Uku. He then talked about his future at the helm of the Dynamo Blues. "We have time to think about the future, now we have to celebrate. "I have been suffering for this team for 8-9 years and luck wanted me to be at the top when we made the great achievement of climbing to Superiore".

Speaking after the match for "RTSH Sport", the President of the blues, Marko Pontreli, did not hide the pleasure of climbing the elite of Albanian football. "This formation was a choice to be a winner and I see that I was not wrong. To enjoy this victory today, to talk a little later about ownership. The moment is not to talk about the future of Dinamo. "It is time to play for the next match and then we will talk," he said. After him, the club's administrator, Ermnal Barushi, also gave a comment to the media, thanking only the footballers, the fans and President Pontreli. "I want to thank the whole group of footballers, the fans who did not stop supporting. I also thank President Pontreli for sending Dinamo to the elite. Premium? "It does not matter, who does not need a premium", he underlined.