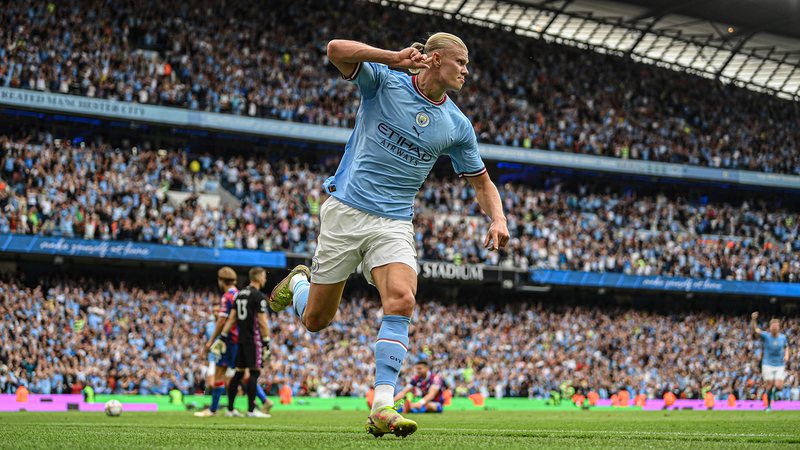 One of the players who is currently making his mark on the green fields is Norwegian Erling Haaland, who since joining Manchester City has exceeded all expectations and is making history with City. So Haaland is the biggest football sensation right now. The striker is surprising everyone with his performances with Manchester City. His stats are scary and if he continues at this rate, he will make history. Erling Haaland is the biggest sensation in world football at the moment. The Norwegian striker is surprising everyone with his skills and flair for goal. The Manchester City player is proving to be a real "killer" in front of the opponent's goal. During the summer that went by, his transfer from Borussia Dortmund made a big fuss. People were doubtful whether the 22-year-old would break out in England, in the strongest league in the world. But, the Norwegian representative shut down the critics by scoring more goals than he has appearances. More precisely, the former Salzburg footballer has scored 19 goals in 12 games so far this season. Haaland has 14 goals in the Premier League and 5 in the Champions League. In the Champions League, he surpassed Luis Suarez by reaching the quota of 28 goals in 22 games. In this competition, the Norwegian has a frightening average of 1.27 goals per game. Haland has achieved 3 "Hat-Tricks" this season, one of them against the rival Manchester United. Last night he scored two goals in the first half and was separated from coach Pep Guardiola, who took him out of the game to rest him. Haaland also leads in terms of goals scored in 100 games in Europe's top leagues. He has scored 103 goals, so he has more goals than games. If he continues at this rate, Haaland could break all possible records. Considering that he still has 10 years ahead of him, when he can play at high levels, the "beast" Haland can enter the history of football. Meanwhile, the collection of firms that demand Haland's removal from football has begun, as they consider him a robot. In fact, Erling Haaland is undoubtedly the player of the moment not only in the Premier League, but in all of Europe. The Norwegian striker, with the last two achievements against Copenhagen, has gone to 19 goals this season, in only 11 games. It seems that in England they don't believe their eyes for these figures scored by the Norwegian, so they immediately started a petition to exclude him from the Premier League because he is a robot. Although it may seem like a joke, so far,