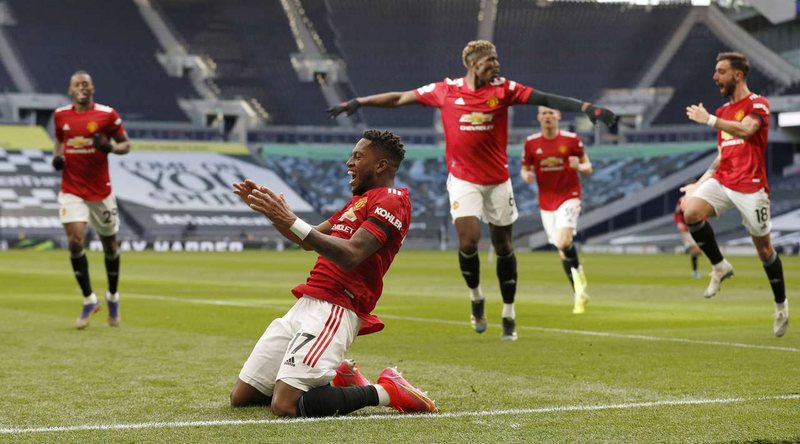 The Premier League played yesterday some of the most important matches of the season, those that belonged to its 31st round. In fact, yesterday's clash was between Tottenham and Manchester United, where Jose Mourinho's team was hosting the former Portuguese coach's team. This match was also awaited with interest due to the fact that the teams are compressed in the rankings and there is a strong fight for positioning in the top-4, a classification that ensures the participation of the top teams in the UEFA Champions League. And Jose Mourinho's Tottenham lost, remaining in seventh place and even many points behind, thus missing a chance for the top-4 zone that would provide more image and income for the club. Thus, Manchester United defeated Tottenham in a thrilling match on Sunday, significantly dampening the hopes of their former coach's team for a place in the top four in the Premier League. Fred, Edinson Cavani and Mason Greenwood with one goal each in the second half completed United's triumph with a comeback, after Son Heung-Min had given Tottenham the lead initially in London. After a clear dominance of Mourinho's team at the beginning of the match, United thought they enjoyed the lead first, but Kavanagh's goal in the 35th minute after an assist by Paul Pogba was canceled out by the VAR, for an intervention of unauthorized to Tom McTominej in advance. That changed things and just five minutes later, Son scored for Tottenham's lead after a super action that started with Harry Kane and ended with an assist by Lukas Moura in the 40th minute. United did better in the second half and Cavani and Greenwood completed the comeback by scoring in the final 10 minutes. This victory almost secures United a place in the top four seven games before the end of the championship. The Red Devils are in second place with 63 points, seven more than Leicester in third place and nine more than Chelsea in fifth place. Tottenham, meanwhile, remain in seventh place with 49 points, six points away from fourth place held by West Ham. It must be said that in yesterday's matches, the sensational victory of West Ham against Leicester was also noticeable, with the result 3-2, a victory that significantly brings West Ham closer to the Leicester team. After this week's games, Leicester is in third place with 56 points, while West Ham is in fourth place with 55 points, so with only one point difference. Of course, The two Manchester holds the first places, where coach Pep Guardiola's City has 74 points in 32 games and is seen as an elusive rival due to the difference with the second place, Manchester United, which after yesterday's victory went to the quota of 63 points. An important victory was also given to Newcastle yesterday, in a direct duel in the bottom zone area with Burnley, 2-1, giving Newcastle hope for a place in the Premier League.